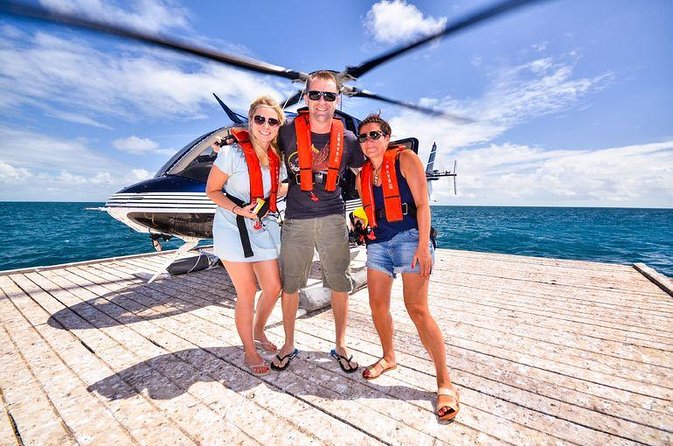 Explore the Great Barrier Reef on a half-day or full-day excursion that travels by helicopter and boat so that you can make the most of your time. Choose from three options for your tour of one of the worlds best coral reefs and enjoy snorkeling and scuba diving.

Admire views of the Great Barrier Reef from your helicopter as you get a multi-angled perspective on one of the worlds top natural wonders.

Choose from three options for your Great Barrier Reef experience. Fly by helicopter in and out of the reef for a 4-hour excursion; fly there and return by boat for a 4.5-hour round-trip. Or get the most time on the reef if you choose the full-day excursion, traveling to the reef by boat and spending five hours exploring there before returning by helicopter to Cairns in the afternoon. More details are in the Itinerary below.

All options spend time on the Great Barrier Reef aboard a deluxe boat that holds a maximum of 100 people, with 18 expert guides to show you the amazing underwater world.

If you take the boat from Cairns in the morning, when you arrive at the reef you stop at two prime locations to see multi-colored coral gardens and schools of fish. Your friendly guides assist you with your snorkel or scuba diving equipment, and provides encouragement and instruction to both newcomers and experienced participants.

If you are a nervous first-time snorkeler or diver, your guides do their best to help you feel comfortable and enjoy your experience. Even non-swimmers can get in the water and see the reef!

You have a choice of included and optional activities on this tour. If you want to learn to scuba dive, a 10-minute SCUBA demonstration is included, allowing you to try it out before purchasing the introductory dive course. Its the perfect opportunity to experience one of the worlds top locations for diving! (Available only on the morning boat cruise)

If you already have your scuba diving certification, you can scuba dive as many as three times at two different locations during the full-day excursion, plus have plenty of time for snorkeling or relaxation between dives. Simply book the dives when you are on the boat. All dive gear and dive computers are provided.

Depending on the days weather conditions and water clarity, your guides choose from 12 exclusive moorings at six locations for the best possible experience for all activities. Generally, in the morning the boat visits one of the true Outer Great Barrier Reef locations (Saxon Reef or Norman Reef). In the afternoon you then head to North Hastings Reef for more snorkeling and helicopter flight connections.

For lunch, enjoy a tasty Australian barbecue buffet served on the boat. Select from a spread consisting of fresh fish, sausages and steak, accompanied by a selection of salads, pastas and prawns.

After a memorable visit to the Great Barrier Reef, return to the mainland by boat or helicopter in the afternoon. If you return by boat, snack on a tropical fruit and cheese platter while your talented crew provides live musical entertainment.

Weight Policy: Individual passenger weights and accompanying carry on luggage MUST be advised at time of booking. Weight variances greater than 10% may incur an additional fee. Maximum single seat payload of 130kg. For passenger comfort and aircraft weight and balance, passengers exceeding 130kg are required to purchase an additional seat at 50% of ticket price - this is non-commissionable and payable to Nautilus Aviation on day of travel.

There is a maximum of 6 to 7 passengers depending on aircraft availability.

Diving within 48 hours of flying is not recommended.(Please note: This does not include the helicopter flight). All participants will be required to complete a health questionnaire prior to diving. Some pre-existing medical conditions (eg asthma, heart conditions, etc) may prevent you from diving, please consult your doctor

Child Policy: Children 3 years and above are charged adult rates. Subject to conditions, children under 3 years may travel free of charge when seated on a parents/guardians lap.

For the Fly/Cruise option you will have a compulsory 20 minute safety briefing before being allowed enter the water, this is part of your two hours out at the reef. It is recommended that you wear swimmers upon check in for this option

Refunds: Cancellation notice of 48 hours is required for a full refund claim and 24 -48 hours, for a 50% refund claim. No refund applies if booking is cancelled inside 24 hours.

Nautilus Aviation has a comprehensive COVID plan in place.