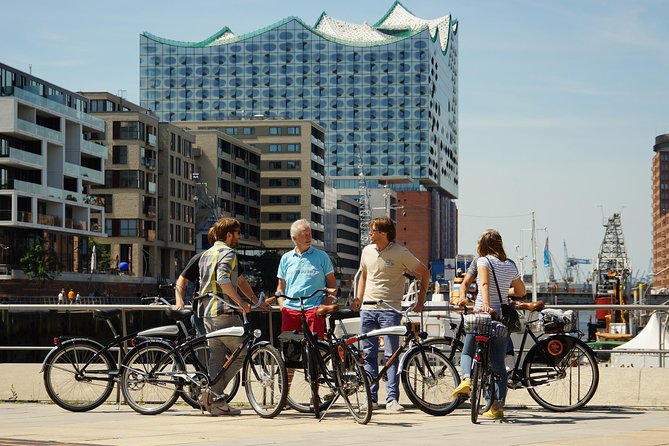 Discover Hamburg on a 3.5-hour guided bike tour. Your tour guide will show you the main sights and tell you all the important facts, figures and stories. There is enough time for photos, questions and a coffee break along the tour. Offered in English or German.

Your guided 3.5-hour bike tour starts at in the district of St. Pauli. After a stop at Heiligengeistfeld, including its massive bunker from WWII and the football stadium of FC St. Pauli, you will continue towards Alster lakes in the city center.

Cycle along the Jungfernstieg, stop at the town hall as well as in the warehouse district, Speicherstadt, from the 19th century. Next, you will get to Hamburg's youngest district Hafencity, including Hamburg's youngest sight, the concert house Elbphilharmonie.

Coming back, the tour stops at a city landmark, St. Michael's Church, before going back into St. Pauli with the last stops above the landing bridges and near the Red Light District along the Reeperbahn.

Use of bicycle and helmet

Operates in all weather conditions, in case of heavy rainfall a walking tour will be offered

Please be at the meeting point 10min. before the tour starts