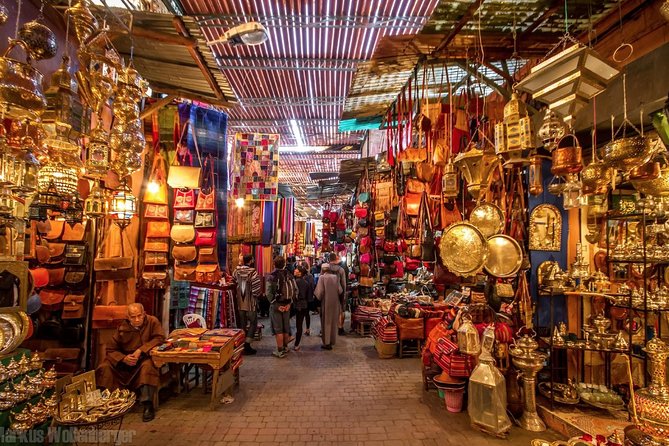 Discover the many faces of Marrakech on a 7-hour sightseeing tour. Experience the bustling Djemaa el-Fna in the medina on foot, visit the Koutoubia Minaret, explore beautiful gardens, such as the Majorelle, Menara Garden and much more....

This tour offers you the chance to see the citys famous historical, natural and culinary highlights in one convenient package. Stroll through some of Marrakechs most picturesque gardens, wander the labyrinthine streets of the Medina and relax over lunch in a traditional restaurant.

VisitThe Saadian tombswhich is a major sight to see in Marrakesh. A short walk from the main square reveals what was hidden for nearly two-hundred years.

Pass by the grand private residence of Dar El Bacha Palace on your way to the narrow streets of the Medina. Hidden away among the maze-like streets are treasures your guide is eager to show you, ovens churning out typical street food, and an array of workshops where craftsmen produce goods to be sold at the souks.

Lunch at a popular restaurant, tuck into the signature Moroccan dish of tagine, which cooks slowly in a specially shaped vessel to create mouthwatering aromas and delicious flavours.

Complete your tour with a view over the plaza of Jemaa el-Fnaa, this is a prime spot for people-watching in one of the citys liveliest spots. Watch as the buzz of daily life unfolds among the market stands and streetscapes below.

After lunch break, we head to Majorelle Gardens, where the morning light illuminates the vibrant colours of the architecture, set vividly against the lush green vegetation. Continue to MenaraGarden for a stroll through the peaceful site.