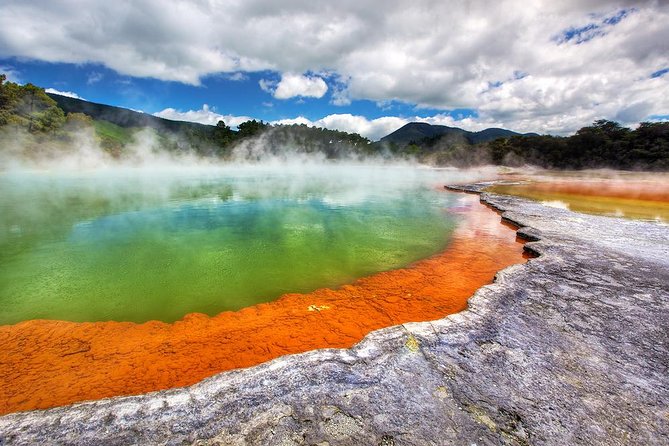 Visit Wai-O-Tapu to see why TripAdvisor says it is "One of the 20 Most SURREAL Places in the World" and why itis considered to be New Zealand's most colorful and diverse geothermal sightseeing attraction. You will take a slow amble to see this unique geothermal landscape sculptured out of volcanic activity over thousands of years and take time to view the world famous Lady Knox Geyser which erupts each day at around 10:15am.
After a lunch at the Wai-O-Tapu cafe you will take a short drive back to Whakarewarewa and visit the Living Maori Village. Here, a Maori guide will take you on a 1-hour guided tour of the village to see bubbling mud pools, the Pohutu Geyser and you will be entertained by a cultural performance of dance and song including the haka.
Then, you will take a drive through Rotorua and show you the city sights before returning to Tauranga. Maximum passengers on this tour is 15.

Diverse landscapes and cultural delights await you on this popular combination tour. Your fully guided small group trip takes in the thermal wonderland of Wai-o-tapu, as well as Whakarewarewa Village in Te Whakarewarewa thermal valley to experience a warm welcome from the local Maori. This is the ultimate geothermal experience!

On top of all this:

Our team has been delivering world-class Shore Excursions for over 16 years. It all started with owner Ian - one man and a beloved Rolls Royce car. Today, the number of vehicles and tours has changed, but the philosophy hasnt every customer is treated like one of the family, and we will make sure you have an unforgettable day. We have over 100 years combined tour guiding experience so you know you are in capable hands (and if youre lucky you may even get to travel with Ian he still loves to get behind the wheel!).

Travel on a modern, air conditioned van with a passionate local as your host. We specialise in small groups to allow an intimate and personalised experience. Every tour is guided and commentated from start to finish - our guides delight in showing off our little corner of the world. And, we guarantee to have you back to the ship on time!

This tour requires some walking on well-made but unsealed paths, gentle inclines and some steps

The tour is not suitable for user of mobility scooters or wheelchairs (unless very small collapsible ones). Folding walkers/frames can be accommodated but passengers must be able to enter a minibus using the standard steps. You must advise us at the time of booking if you are bringing any mobility device - failure to do so may result in you not being able to take the tour.

As the Lady Knox Geyser erupts at 10:15am everyday, you may not be able to see the eruption if the tour departure time does not suit.