Guided Tour Of Jerusalem: The Biblical City Of David - With Reviews & Ratings

Guided Tour Of Jerusalem: The Biblical City Of David 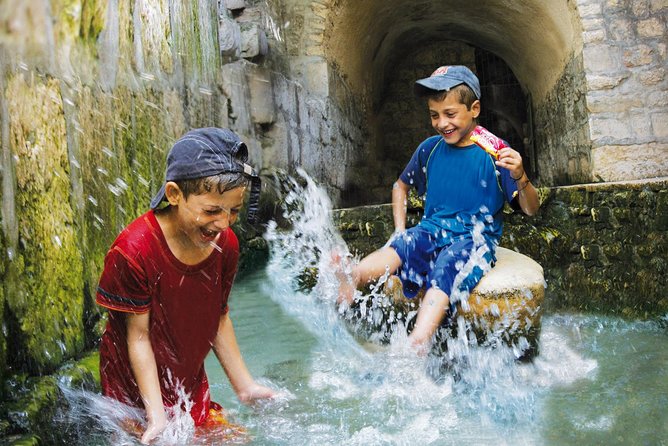 Come join in on a three hour adventure as we rediscover Ancient Jerusalem-israel">Jerusalem, just a five minute walk from the Western wall. Jerusalem was born over three thousand years ago on a small hilltop called the City of David. Today, countless archaeological excavations are continually revealing incredible discoveries that are changing our understanding of Jerusalems history throughout the ages. The stones are revealing their secrets, and the City of David's expert guides are excited to share them with you.

While the modern city of Jerusalem bustles with life above ground, below ground, the ancient city of Jerusalem is being rediscovered, one pickaxe at a time. The City of David, located outside the Old city Walls actually predates the Old city by hundreds of years. Measuring only 11 acres, Jerusalems birthplace is unsurprisingly one of the most extensively excavated sites in the region.

The tour of the City of David begins with a breathtaking observation point overlooking Biblical Jerusalem which sends visitors 3,800 years back in time to the days of Abraham, when the first foundations of the city were laid.

The journey continues to an excavation that might very well be the site of King Davids Palace. Archaeological excavations revealed foundation stones from the 10th century BC, the period when King David lived and ruled. Bullae, clay seal impressions bearing Hebrew names from the Bible were found, as well as a tower that was part of ancient Jerusalems city walls during the days of Nehemiah, who lived during the Second Temple period.

Stop at the Royal Acropolis, also known as Area G, to see First Temple homes which were destroyed in the destruction of Jerusalem, before descending underground into the water system, originally used by David and his men to conquer Jerusalem.Pass through the Gihon Spring Citadel, which protected Jerusalems main water source- the Gihon Spring, before entering the highlight of our tour-a walk through Hezekiahs Tunnel . The Springs waters still flow through the tunnel, making for a fun and wet Jerusalem adventure. An alternative, dry route is open to those who choose.

Up next is Jerusalems famous Siloam Pool, and the Herodian Road and Water Channel. Visitors who choose may finish their tour at the Siloam Pool and take a shuttle (for a small fee) up to main entrance.The Herodian Road was the main thoroughfare of Jerusalem during the Second Temple Period. Abutting the road is a water drainage tunnel that collected rainwater and brought it outside of the city. It also served a s a refuge for Jews who were trying to exit the Old city and escape the Romans. An incredible amount of important and rare artifacts were found in this tunnel and channel that have greatly contributed to our understanding of events. The tour concludes in the Givati Parking Lot Excavation,just a five minute walk from the Western wall. the largest archaeological excavation in the region, which is continually revealing new layers of Jerusalems history, from the Biblical to the Islamic period.

Flashlights for the water tunnel are available for purchase in the City of David Store. Cost: 5 NIS (about $1.50)

A shuttle service is available for 5 NIS (about $1.50) to bring visitors from the Siloam Pool at the bottom of the site, back up to the main entrance.

There are lockers onsite that one may use to store small items. Cost: 10 NIS (about $2.50)

The tour route includes multiple steps, as well as places with uneven surfaces.

Walking through Hezekiahs Tunnel requires the use of flashlights and water shoes (both can be bought at the site). The use of candles, as well as walking without shoes is absolutely prohibited.

Entrance to Hezekiahs Tunnel is recommended from age five. The water is 70cm high (a little over 2 feet high).

Babies may be carried through Hezekiah's Tunnel in a front carrier, but not in a back carry. One may rent a baby carrier in the City of David.

The tour route is not conducive to the use of strollers.