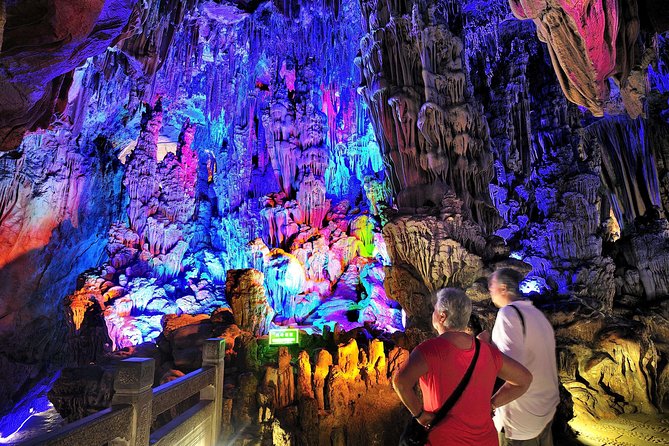 Explore the karst landscape of Guilin on a private 7-hour tour, and visit Reed Flute Cave, also known as the Palace of Natural Arts, to see the colored lights of the natural cave. Get panoramic views of the River Li from Elephant Trunk Hill, and more.
Highlights:
Explore the limestone karst formations of Guilin City
Go to Elephant Trunk Hill to see the symbol of Guilin
Admire the colored stalactites, stalagmites, stone pillars, and stone flowers of Reed Flute Cave
Discover more than 200 Tang Dynasty Buddha statues on Fubo hill

Situated on the west banks of the River Li, Guilin City has become one of Chinas most popular cities for its stunning limestone karst rocks and curious caves.

On this full-day sightseeing tour you will explore some of the citys most fascinating natural landmarks, starting at Elephant Trunk Hill on the confluence of the Li River and Peach River. This symbol of Guilin takes its name from its resemblance to an elephant drinking water from the river. The popular site dates back more than 3.6 million years, and towers more than 180 feet (55 meters) above the green waters of the river.

Continue to Fubo hill. Partially submerged in the river, it was named for General Fubo of the Tang Dynasty, and was the site of his Mayuan Temple. Because of its height, the hill is said to tame the waves and stop surging waters, which then form whirlpools.

Climb almost 350 steps for a bird's eye view of Guilin. The steps beside the Sword Testing Stone wind their way to the 1,000 Buddha Cave, site of more than 200 Tang Dynasty Buddha statues.

Next, go to Reed Flute Cave to see beautiful stalactites, stalagmites, stone pillars, and stone flowers of various shapes, all glistening in colored lights. Finally, learn about pearl farming at the small South China Pearl Museum, where youll find stalls selling craft jewelry if you want to purchase a unique gift, before the transfer back to your hotel.