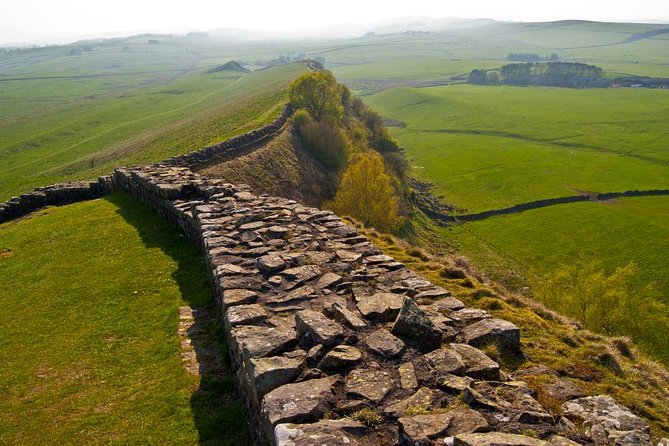 Travel through 2,000 years of history as you visit ancient Roman sites such as Hadrians Wall, Dere Street, Birdoswald Fort, Steel Rigg and historic villages along the border of Scotland and England. You'll drive through stunning scenery in Northumberland National Park, the Irthing Valley and the Southern Uplands and learn about the Anglo-Scottish wars of the 14th16th centuries. Your professional guide will illuminate the fascinating history of Roman Britain and the Scottish Borders on this small-group (limited to 16 people) day tour from Edinburgh.

This is a basic itinerary for your Hadrian's Wall, Roman Britain & The Borders Small-Group Day Tour From Edinburgh -

A beautiful market town that Mary Queen of Scots famously visited. Optional visit to the Abbey.

Make a stop at the scenic Carter Bar on the edge of the Cheviot Hills. This crossing point between Scotland and England runs close to the ancient Roman road and has formed the border between the two countries for the past 700 years.

Vindolanda is one of Europe's most important Roman archaeological sites. Vindolanda means white lawns or white fields. Get a glimpse of the past when exploring the ruins with your guide.

Hadrians Wall - The wildest and most northerly frontier of the ancient Roman Empire.
Follow the road that takes along the south side of the wall, stopping at Steel Rigg. Walk beside the wall and experience the isolation that Roman foot soldiers would have experienced as they guarded their empire against the barbarians to the north.

See the remains of all of the Wall's defining features. Stand in awe as the longest remaining stretch of the Wall spans as far as your eye can see, and explore the ruins of the Roman fort, a turret, and milecastle.

The minimum age for this tour is 5 years

Check-in closes 15 minutes prior to departure

Luggage Allowance: You're restricted to 14kg (31lbs) of luggage per person on our tours. This should be one piece of luggage similar to an airline carry-on bag (approximately 55cm x 45cm x 25cm / 22in x 17in x 10in) plus a small bag for onboard personal items.