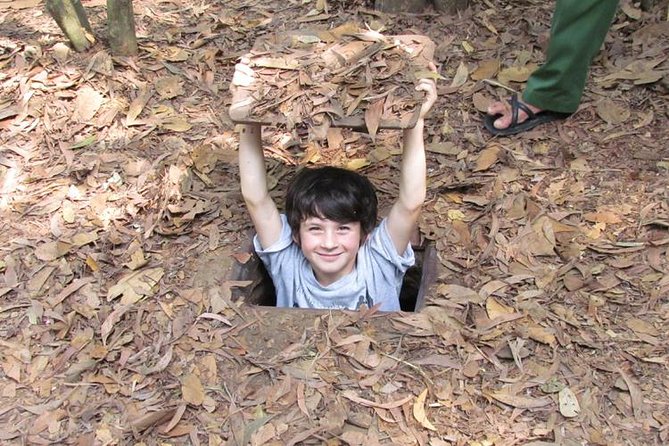 Today the remaining tunnels have become a major tourist attraction giving the visitor a unique experience and a feel of what underground life in the Vit Nam War must have been like. The tunnels have been widened for our benefit (otherwise we would not be able to enter them!) For those interested there's even the opportunity to fire off rounds from an AK47 or MK16 at the nearby rifle range.
We will pick you up between
08:00a.m. - 08:30a.m. at all places in District 1, H Ch Minh City (
or 01:00p.m. - 01:30p.m. for Afternoon option). We drive between
1,5 hours - 2 hours through the pleasant countryside to C Chi District. Before entering the tunnels we will watch a short introductory video showing how the tunnels were constructed its history. We then spend the next hour exploring the maze of tunnels. On display are various booby traps and the quiet remains of an American tank. Along the path you'll see various craters left by 500-pound bombs dropped by B52 bombers. After your visit, try some local tapioca that sustained VC fighters for years. At the end of your morning tour, you will have 2 options:
* Option 1: We can take you to a local restaurant in the city center, where you can enjoy a complimentary Vietnamese three-course lunch, and then make your own leisurely way back to your place.
* Option 2: We will drop you back to where we picked you up in the morning.
Please notes that:
- Lunch option is only applied for morning tour.
- Please inform your choice to our tour-guide in advance.
- Option 1 will apply to all tour dates EXCEPT the period from February 1-10, 2019.
- Timing and itinerary are subject to change without notice. However, we will do everything we reasonably can to make sure everything goes according to plan.

Pick-up at all places in District 1, H Ch Minh City

Lunch - Complimentary Vietnamese noodle soup then make for your own way back to hotel. (Lunch will not applied for afternoon departure & on Sunday/ public holidays)

We pick up guests at several hotels in District 1 - H Ch Minh city, please be ready at your hotel lobby, and we'll come to your door as soon as we can.

Child rate applies only when sharing with 2 paying adults.

Only one under-five free admission per family