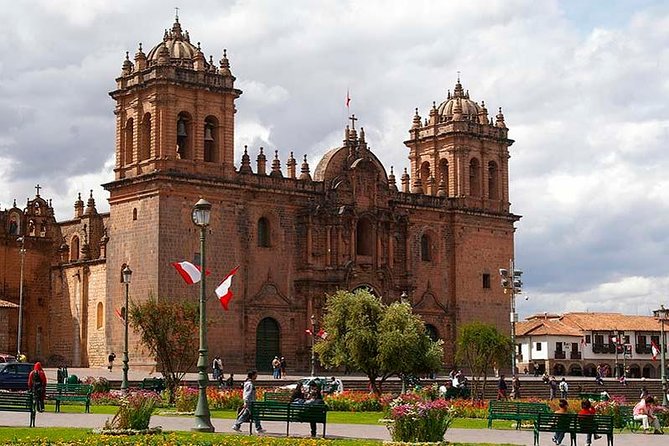 Explore Cusco, the former capital of the Inca Empire and one of the most important cities of the Vice royalty of Peru. At that time, and in the hands of the Spaniards, it was adorned with churches, palaces and baroque and neoclassical plazas, which is what today makes it the main tourist place in Peru. Declared a World Heritage Site in 1983 by Unesco, it is usually called, due to the great number of monuments that it possesses, the "Rome of America".

Pick-up for your Cusco City Tour around 1pm. The city tour takes you around the city of Cusco and into the best historic sites such as Koricancha (the temple of the sun) and the Cathedral. It then heads out of the city to the amazing ruins of Sacsayhuaman, the healing waters of Tambomachay, the Incan fortress of Pukapucara and the ancient tunnels of Qenko. All the sites are visited and toured with the guide. The tour lasts approximately 4 hours. Drop off at Plaza Regocijo around 7:00pm.

QORICANCHAis the strong showing of the fusion of Inca and Spanish cultures. On the basis of what was the Sun Temple of the ancient Peruvians, the church and convent of Santo Domingo they were built. The temple was built with finely carved stones. Inside, the walls of the various enclosures were covered with sheets of gold and silver.

CUSCO CATHEDRAL, is located on the Plaza de armas. Building was completed in 1654, Adjacent and joined to the cathedral is the smaller Iglesias del Triunfo, the first Christian church to be built in Cusco, in addition to its official status as a place of worship, has become a major repository of Cusco's colonial art It also holds many archeological artifacts and relics.

Sacsayhuaman Sections were first built by the Killke culture about 1100; they had occupied the area since 900. The complex was expanded and added to by the Inca from the 13th century; they built dry stone walls constructed of huge stones. The workers carefully cut the boulders to fit them together tightly without mortar. This site is at an altitude of 3,701 m. In 1983 Cusco and Saksaywaman together were added to the UNESCO World Heritage List for recognition and protection.

PUKA PUKARAis a site of military ruins in Peru situated in Cusco. This fort is made of large walls, terraces, and staircases and was part of defense of Cusco in particular and the Inca Empire in general. The name probably comes from the red color of the rocks at dusk. Puka Pukara is an example of military architecture that also functioned as an administrative center.

QENQOis an archaeological site in Cusco The site was declared a Cultural Heritage of the Cusco Region by the National Institute of Culture. It is one of the largest wak'as (holy places) in the Cusco Region. Manywak'as was based on naturally occurring rock formations. It was believed to be a place where sacrifices and mummification took place.

TAMBO MACHAYis anarchaeological site associated with the Inca Empire, located near Cusco, Peru. An alternate Spanish name is El Bao del Inca ("the bath of the Inca"). It consists of a series of aqueducts, canals and waterfalls that run through the terraced rocks. The function of the site is uncertain: it may have served as a military outpost guarding the approaches to Cusco, as a spare sort for the Incan political elite, or both.

Pick up from Hotel in Cusco

Guided tour in English or Spanish

Entrances to Qoricancha and ruins

Drop off at Plaza Regocijo ( 2 blocks from main square)