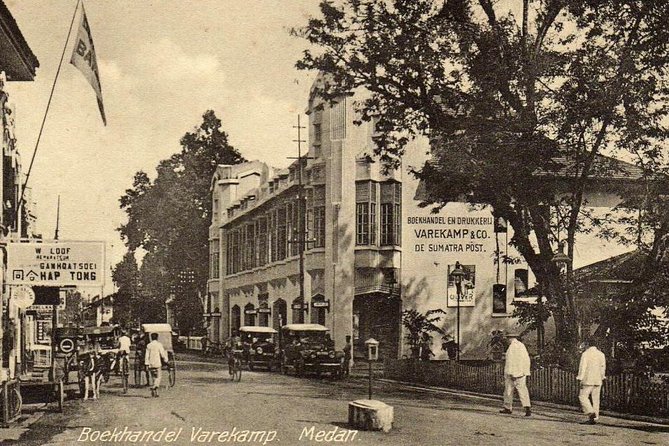 The following trip will include : The Sultan's Palace, The Great Mosk, Tjong A Fie Mansion, Former offices of the Deli Company and the Amsterdam Trading Company and still existing Chinese, Malay and Dutch architecture.

The first route
starts at the old central square of Medan, the Lapangan Merdeka (Independence square), in former times called Esplanade. Along this square are the central buildings of the town, some of them originating from colonial times like the Lonsum building of the British Harrisons & Crosfield company, in former days called the Julianagebouw, build in 1911, the offices of the Netherlands Indian Trading Bank and the Netherlands Trading Company build in the 1920s, the old town hall from 1908, the office of the Bank Indonesia, dating back to 1907, Hotel Dharma Deli (hotel De Boer) build in 1898 and the postoffice from 1911.

The second route
goes through different ethnic quarters of Medan, first through the Chinese quarter where you can still see remnants of traditional Chinese shophouses. Further on do you pass by examples of the Amsterdam School of Architecture like the Catholic Church and the swimmingpool. The second part of this route goes via the so called Sultans-kampong, the grounds of the Sultan of Deli. Here we pass by the beautiful Grand Mosque from 1906 and the Maimoon Palace from 1889, both build by Dutch architects. From the Sultanskampong we drive through the oldest street of Medan, the Kesawan, with many remnants of days gone by like the AVROS and Varekamp buildings, Tip Top restaurant, the Tjong A Fie mansion, the Stork building and the former department store of Seng Hap. This route ends in the central square.

The fourth and last route
starts again from the Esplanade whereafter we drive to the former European Polonia quarter with many beautiful villa’s. We pass by the military excercition fields where once Mata Hari lived, via the old court of justice and the former house of the Resident of East Sumatra build in 1898. Via fine examples of Amsterdam School Architecture like the Immanuel School from 1938 and the former research station for the tobacco in Jalan Diponegoro, we proceed to the Indian quarter where in former times the Indian population used to live. The Indian quarter is connected to the Medan Baru quarter via the Tjong Yong Hian bridge build in 1917. The tour continues via the residence of the Governor of North Sumatra (1939), the in Amsterdam School of Architecture style build Elisabeth Hospital (1930) and ends with the impressive office of the Amsterdam Trading Company finished in 1924.