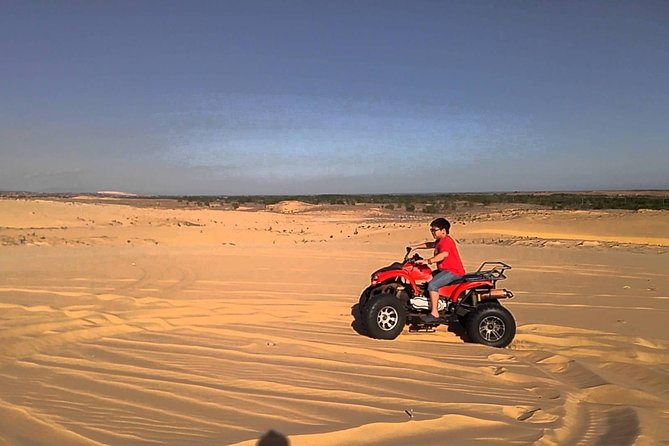 On this half-day Jeep tour, you'll get a chance to visit the dunes, fairy stream, and experience the culture of the local fishing village. Your driver will also be your guide as you see all the picturesque wonders of the Mui Ne area. This tour is offered for sunrise or sunset so you can choose which way you'll see the land. Hotel pickup and drop off is included in the price.

At your confirmed time, you will be picked up at your Mui Ne hotel by Jeep and go directly to the white sand dunes, about 25 miles (40 km) away. This 5km sandy desert paradise attracts visitors due to its natural beauty and changing shapes as a result of the blowing wind. Spend 30-45mins to enjoy sand sliding or quad biking (ATV) (extra payment).

Afterwards, you will visit the fishing village to see a bit of what life is like here for local fishermen, who deliver their products to the village market such as fish sauce and seafood. Your final stop is Fairy Stream, where you can see a stunning canyon located just around the corner from a small brook. Fairy stream is situated is situated between the white and red sand dunes on one side and rows of shady coconut palms, on the other side.

Once you've had your fill, you will be brought back to hotel to have breakfast and relax.

This option is similar to the sunrise tour but the itinerary is a bit different. After pickup by Jeep, head first to Fairy Spring followed by the fishing village, where you'll enjoy a sunset view of Mui Ne Bay, dotted with fishing boats full of fresh seafood. Then visit the sand dunes and see Lotus Lake.