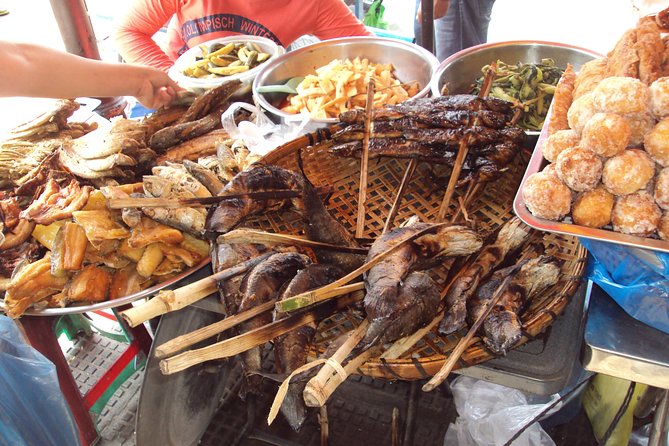 See Phnom penh from a culinary perspective on this 6-hour food walking tour. With a private guide, gain insight into Phnom penh's vibrant street food scene and admire the Art Deco and French colonial architecture, as well as historical pagodas and bustling markets. You'll learn about the city's fascinating history, hear anecdotes, and receive lots of tips about local food and sights.

Your tour begins as your private guide meets you at your hotel.

After this breakfast, walk to Phnom Penhs old French quarter, home to fine examples of colonial-era architecture where you can admire Belle Epoque and Art Deco designs, including the post office and French administration building. Then walk to Wat phnom, meaning Mountain Pagoda, a Buddhist temple located in the heart of the city. Built in 1373, it is the tallest religious structure in the capital.

Walking onward, pass by the National library and Raffles le royal hotel with its colorful history; opened in 1929 by the French, the hotel has hosted such various figures as Jackie Kennedy and Pol Pot. Between 1970 and 1975, most of the journalists working in Phnom penh stayed here, as it was the last refuge before the Khmer Rouge forced all foreign nationals into the French embassy.

Next walk to the train station, a colonial-built structure, and continue to Cambodias largest market and a Phnom Penh landmarkPsah Thmey, aka Grand Market. This amazing Art Deco building built in 1937 by French architect Louis Chauchon teems with stalls that sell a range of goods, from silver to seafood. In the market, you have the chance to meet a traditional Cambodian fortune teller, if you wish (own expense), and try some of the local snacks, depending on whats available.

Continue to the French embassy, reopened in 1996 on the same site that housed the former embassy until it was sacked by the Khmer Rouge in 1975. When the communists took the city, 1,400 Cambodians and foreigners sought shelter in the compound. Under threat that the Khmer Rouge would overrun the embassy, the French agreed to hand over more than 600 Cambodians to the new authorities. Soon afterward, the regime expelled all foreigners and sealed off Cambodia's borders.

In the early afternoon, your tour ends with the transfer back to your hotel by tuk-tuk.

Food and snacks during the tour

Other expenses not mentioned