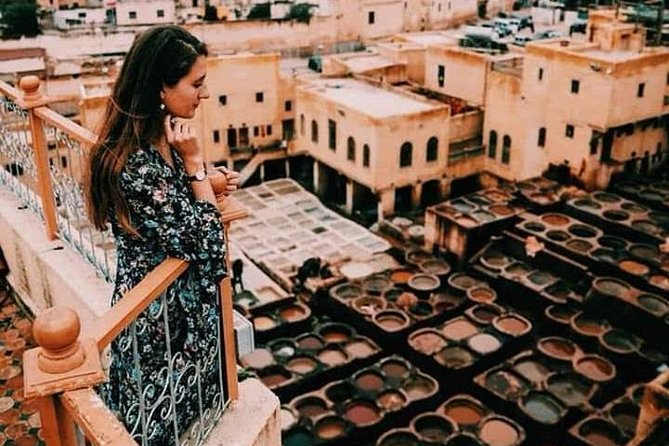 Our tour guides are very friendly, passionate about their culture and very well educated about the rich history of the city... Our tours is cultural and handicraft

Itinerary
This is a typical itinerary for this product
Stop At: Chouara Tannery, Hay Lablida Chouara, Fes 30030 Morocco
Tanners District: One of the main attractions of Fes, the tanners quarters is where leather is produced using the same centuries-old methods. You can get a birds eye view from the raised platform and watch the entire process. El-Attarine Madrasa or the Medersa Attarine: Visit Fess most popular attraction, the El-Attarine Madrasa in the heart of the city, built in 1325. See the fine examples of Merenid craftsmanship around the madrasa, especially the stucco and cedar wood carvings on the ceiling. Karaouine Mosque: One of the biggest religious structure in Morocco, this mosque lies in the heart of the medina. The university attached to the mosque has been the centre of Islamic learning in Morocco for more than 1000 years.
Duration: 45 minutes
Stop At: Al-Attarine Madrasa, Rue Talaa Kebira, Fes Morocco
Al-Attarine Madrasa, the madrasa being a kind of educational institution. Built during the 14th century during the Marinid dynasty, it holds a tiny yet impressive courtyard with a large basin at its center and walls decorated with traditional patterns, carved stucco ornamentations, mosaic tiles, and Arabic calligraphy.
Duration: 30 minutes
Stop At: Place Seffarine, Fes Morocco
Whilst exploring the streets of the old Medina of Fes, you came upon these true craftsmen, rhythmically beating their hammer on metal to make the most amazing brass and copper goods.
It is fascinating to watch them hard at work, using the same traditions that have been used for hundreds of years.
Duration: 15 minutes
Stop At: Kairaouine Mosque (Mosque of al-Qarawiyyin), Fes el-Bali Qayruwan quarters, Fes 30030 Morocco
In the heart of the Old Medina lies Masjid al Qarawiyyin, dating back to the 9th century it is believed to be the world's oldest university and established by a woman, Fatima al Fihri.
Duration: 15 minutes
Stop At: Museo Nejjarine, Pl. Nejjarine, Fes 30030 Morocco
Funduq al-Najjariyyin a traditional inn used by merchants and traders.
As it is now, a museum about traditional wooden arts and crafts. The interior courtyard is very impressive and held three floors of museum space, from wooden ornamentation to traditional tools. Once you reached the rooftop you then have a great view over the old town and grab a drink at the local cafe
Duration: 45 minutes
Stop At: Bou Inania Medersa, Rue Talaa Sghira, Fes 30110 Morocco
The Madrasa Bou Inania was founded in 135156 as an educational college and a neighborhood mosque
A central courtyard contains a fountain for ablutions, surrounded by keyhole arches, with a square minaret towering above. The interior architectural details are stunning in workmanship and detail: intricate and geometric zellige tiles (colored tiles in patterns), honeycomb muqarnas (decorative plasterwork), beautiful cedar mashrabiyyas (lattice screens), and massive brass entrance doors and elaborate cedar ceilings...
Duration: 30 minutes