Half-Day Tour Of Amritsar Including The Golden Temple

Half-Day Tour Of Amritsar Including The Golden Temple 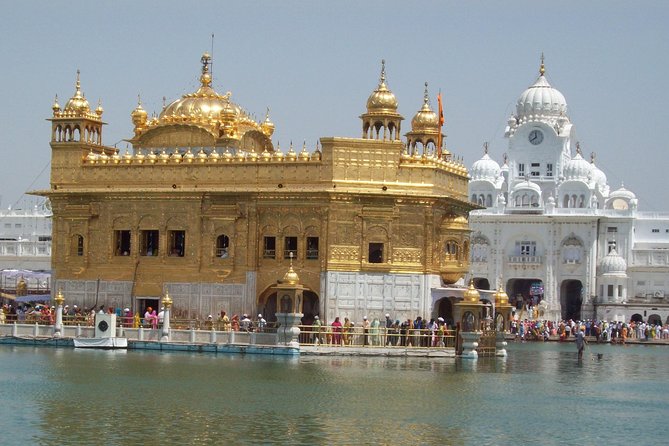 On this 5-hour tour, visitthe historical places that have played a major role In Indias independence. Visit Jallianwala bagh to witness the massacre created by General Dyer. Learn about the culture of Punjab, their people and significant places.

Start your tour with a pickup from your hotel. After you guide briefs you about your tour, you will ride a tuk tuk or rickshaw to your first destination,Jallianwala Bagh, a memorial for the massacre by General Dyer that killed more than 1000 people back in 1919.

Walk through the local streets of Amritsar to visit the Golden Temple. It is the holiest Gurudwara of Sikhism, located in the city of Amritsar. Amritsar (literally, the tank of nectar of immortality) was founded in 1577 by the fourth Sikh guru, Guru Ram Das. The present-day gurdwara was rebuilt in 1764 by Jassa Singh Ahluwalia with the help of other Sikh Misls. In the early nineteenth century, Maharaja Ranjit Singh secured the Punjab region from outside attack and covered the upper floors of the gurdwara with gold, which gives it its distinctive appearance and its English name.

Afterwards, visit the Maharaja Ranjit Singh Museum, who was the founder of Sikh Empire. Prior to his rise, the Punjab region had numerous warring misls (confederacies), twelve of which were under Sikh rulers and one by a Muslim. Ranjit Singh successfully absorbed and united the Sikh misls, took over other local kingdoms to create the Sikh Empire. He repeatedly defeated the invasions by Muslim armies particularly those arriving from Afghanistan, and established friendly relations with the British. You will learn more about Maharajas life by visiting the museum.

End your tour with famous Amritsari Kulcha and chilled Lassi at a local eating spot, famous for its snacks. You will head back to the Golden Temple where your tour ends, from which you are free to explore the city on your own.

Please dress modestly; arms and legs must be covered at places of worship

Shoe must be removed at most places of worship.