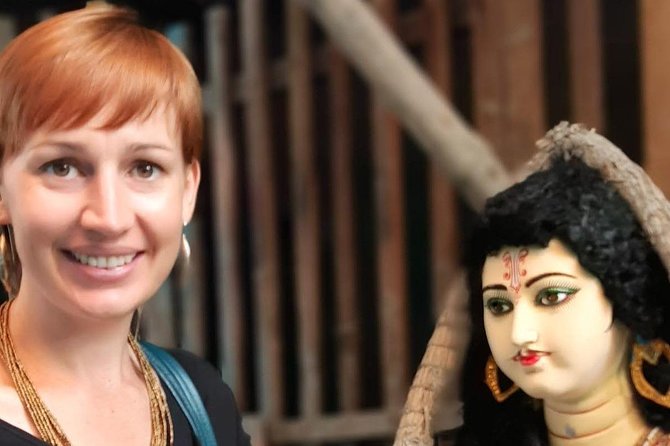 4 Hours Half Day guided Kolkata Tour by A/C Car.
Enjoy a Tram ride during the Tour.
Complimentary Pick up & drop off at your location (within central Kolkata)
Visit Mother Teresa's House & learn about this incredible woman and her humanitarian efforts.
Take a walk around the 'White Town' Colonial city that was developed by the British East India Company.
Visit India's Largest Flower Market & iconic Howrah bridge.
Explore Potter's town & see the idols being handcrafted.
Pass by the oldest part of the city.
Stop at iconic Indian Coffee House.

Itinerary
This is a typical itinerary for this product
Stop At: Mother House A J C Bose Road, Kolkata (Calcutta) 700016 India
Mother House or Missionaries of Charity is a religious congregation that was established by Mother Teresa in 1950. An area of the house is reserved for followers to pay their respect to Mother Teresa. Here, one can find Mother Teresa's Tomb and an exhibition that displays her work through photographs, awards and articles. Some of her belongings like her cloths, her sandals and her bag are also displayed. (Closed on Thursday)
Duration: 15 minutes
Stop At: South Park Street Cemetery, Kolkata (Calcutta) India
The Park Street Cemetery was one of the earliest non-church cemeteries in the world, and probably the largest Christian cemetery outside Europe and America in the 18th century.
Duration: 15 minutes
Stop At: Victoria Memorial Hall, 1 Queen's Way, Kolkata (Calcutta) India
The Victoria Memorial is a magnificent marble building, located in the heart of the City of Joy, Kolkata (erstwhile Calcutta) in West Bengal, India. It is one of the most famous monuments in West Bengal that has become a museum and popular tourist spot of the state. It was built between 1906 and 1921. It is dedicated to the memory of Queen Victoria. (Museum Closed on Monday)

Duration: 30 minutes
Stop At: Black Hole Monument (Holwell Monument), 3, Church Ln, B.B.D. Bagh, Kolkata, West Bengal 700001, India
The British erected a 15-metre-high obelisk; it now is in the graveyard of St. John's Church, Calcutta. Holwell had erected a tablet on the site of the 'Black Hole' to commemorate the victims but, at some point before 1822, it disappeared. Lord Curzon, on becoming Viceroy in 1899, noticed that there was nothing to mark the spot and commissioned a new monument, mentioning the prior existence of Holwell's; it was erected in 1901 at the corner of Dalhousie Square (now B. B. D. Bagh), which is said to be the site of the "Black Hole of Calcutta".
Duration: 10 minutes
Stop At: Job Charnock Cemetery, Church Ln, B.B.D. Bagh, Kolkata, West Bengal 700001, India
Job Charnock was an employee and administrator of the East India Company, British regarded him as the founder of the city of Kolkata (formerly Calcutta).
Duration: 15 minutes
Stop At: Howrah Bridge, Jagganath Ghat 1, Strand Road, Kolkata (Calcutta) 700001 India
Howrah Bridge, the historic bridge is a engineering marvel & one of the busiest bridge in the world. Howrah Bridge is a bridge with a suspended span over the Hooghly River in West Bengal, India. Commissioned in 1943.
Duration: 15 minutes
Stop At: Malik Ghat Flower Market, Southeast end of Howrah Bridge, Kolkata (Calcutta) India
Kolkata's Mullick Ghat Flower Market, said to be India's largest Flower Market and contain more than a century of history.
Duration: 30 minutes
Stop At: Kumartuli, Hatkhola, Kolkata (Calcutta) India
Kumartoli, is a traditional potter's quarter in Northern Kolkata. Clay idols are manufactured here for various festival & also export them to other countries.
Duration: 30 minutes
Stop At: Indian Coffee House, No.15 Near, Sharda Book Stall, Bankim Chatterjee St, College Square West, College Square, Kolkata, West Bengal 700073, India
Spend few minutes enjoying Coffee & snacks at Kolkata's famous Indian Coffee House.
Coffee House is a cafe. The history of the Coffee House at College Street can be traced to Albert Hall, which was founded in April 1876. Later, the Coffee Board decided to start a coffee joint from the Albert Hall in 1942. Notable citizens were frequent visitors to the place. The place became a renowned meeting place (Adda) for the intellectuals, students, poets, artistes, literati and people from the world of art and culture. It has played an important part in Calcutta's (Kolkata) cultural history and known as the hub of intellectual debates. Kolkatas Indian Coffee House is quite a nostalgic hot-spot in the city.
(Closed on Sunday)
Duration: 15 minutes
Stop At: College Street (Boi Para), Kolkata (Calcutta) India
College Street, also known as Boi-Para (Colony of Books), is a prominent center of Kolkatas literary crowd. It is the largest second-hand book market in the world and largest book market in India. People from Kolkata and different parts of India gathers here for their books. The street is also dotted with countless very small book kiosks which sell new and old books.
Duration: 10 minutes
Stop At: St. Paul's Cathedral, 1A, Cathedral Road, Kolkata (Calcutta) 700071 India
St. Paul's Cathedralis acknowledged as the first EpiscopalChurch in Asia.
Duration: 10 minutes