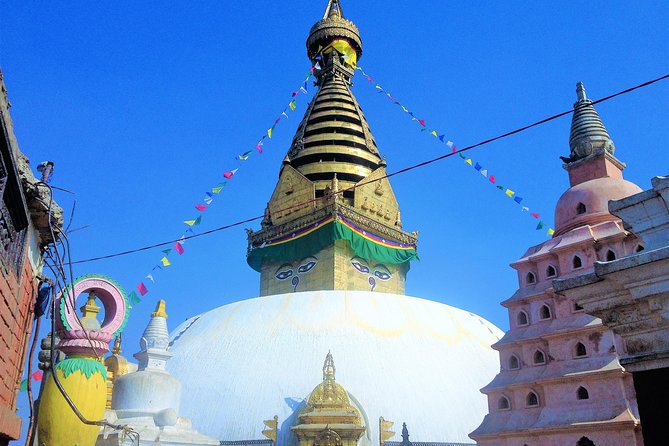 Situated in the west of Kathmandu city, Swayambhunath Stupa is a primeval religious architecture atop a hill in the Valley. It is said that the entire Kathmandu valley was once filled with an enormous lake, out of which a lotus was grown up. The valley came to be known as Swayambhu, meaning "Self-Created." The name comes from an eternal self-existent flame (swayabhu) over which stupa was built afterward.
HIGHLIGHTS
Visit holiest Buddhist Chaityas
View the entire Kathmandu valley
See the combination of two major religion Hinduism and Buddhism
Observe ancient religious architecture
Find yourself among the monks
Learn the mystery of all the holy shrines in Kathmandu Valley
Transportation by private Car

You can start this guided trip either in the morning or in the afternoon driving 3 KM to the Swayambhunath Stupa from the Kathmandu City. It is commonly known as the Monkey Temple as there are holy monkeys living around the temple territories.

Although the site is considered Buddhist, the place is revered by both Buddhists and Hindus. Numerous Hindu monarch followers are known to have paid their homage to the temple, including Pratap Malla, the powerful king of Kathmandu, who is responsible for the construction of the eastern stairway in the 17th century.

There is a large pair of eyes on each of the four sides of the main stupa which represent Wisdom and Compassion. Above each pair of eyes is another eye, the third eye. It is said that when Buddha preaches, cosmic rays emanate from the third eye which acts as messages to heavenly beings so that those interested can come down to earth to listen to the Buddha. The hellish beings and beings below the human realm cannot come to earth to listen to the Buddha's teaching; however, the cosmic rays relieve their suffering when Buddha preaches. Between the two eyes (also called Wisdom Eyes), a curly symbol, symbolizing the nose, is depicted which looks like a question mark, which is a Nepali sign of number figure one. This sign represents the unity of all things existing in the world as well as the only path to enlightenment through the teachings of Buddha.[9]

Transport by private vehicle with driver