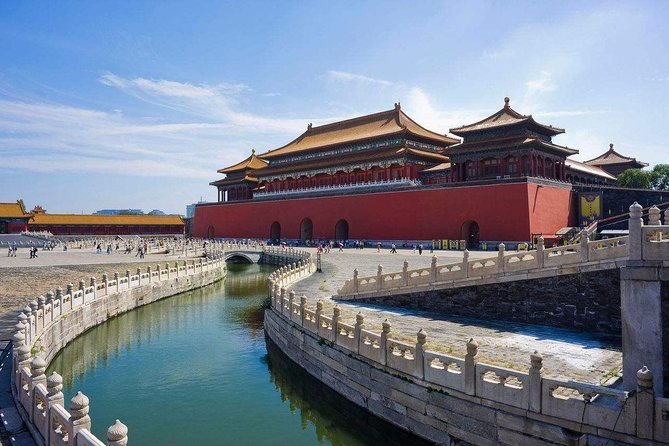 The tour start pick up from 9am or 1pm for avoiding heavy traffic. The sun is shining brightly with appropriate climate. Accompanied by a professional tour guide, experience the solemn Tiananmen Square recording the persistent revolutionary spirit and fearless heroic soul. Get acquaintance with the long history and imperial life of Forbidden City. Show you around the most valuable areas in the Forbidden City from the friendly tour guide. Marvel at its architecture and ancient historical culture. Enjoy a cup of coffee or tea in the imperial garden like an emperor and an empress. Welcome your join!

Tour guide and driver pick you up from hotel from 9am or 1pm. You will have a sightseeing on those architecture along the road en-route. At first, you come to the heart of China, walk above the biggest urban center square in the world, and marvel at the solemn Tiananmen Square. After taking some memorable photos, you move to the palace museum which is the imperial palace of Ming and Qing Dynasty, named as Forbidden City in the past. You will marvel at the architecture essence of Chinese ancient palace. Walking above the passage which once represented the supreme power of the emperor, you arrive to the main gate of the Forbidden City. You will at first visit the working area of the emperor, then residential area and at last the imperial garden. When you feel thirsty, you will enjoy a cup of coffee and tea in the imperial garden, like an emperor and empress. The impressive tour ends from sending you back hotel.

A cup of tea or Coffee