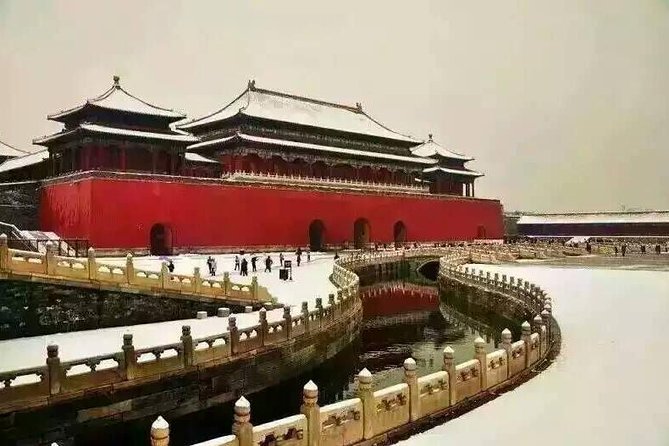 This a private half-day walking tour of several UNESCO World Heritage Sites in Beijing, must see heritage attractions in Beijing.Start with a look at the monuments of Tiananmen square, then tour the immense Forbidden city complex with your knowledgeable tour guide.You will have your own free afternoon.

Picked by our tour guide at your hotel at 8:30 am or 13:30 pm. Then head to Tiananmen square, the largest public square of this kind in the world. Located in the heart of Beijing City, it is the site for massive parades and rallies.This was the site when in 1949, from a rostrum on Tiananmen (the Gate of Heavenly Peace), Chairman Mao proclaimed the establishment of the People's Republic of China.
For security reason, Tiananmen Square is a fenced square circled by low iron grids with main four entrances east, west, south and north. The square is now open to the public till sunset, but all the tourists have to pass a security check before they enter the square. So check points have been set up at all the entrances leading to the square.

The 40-minute visit allows you to have a glimpse at the outside of Memorial Hall of Chairman Mao, the Monument to the people's heroes, the magnificent Great Hall of the People, the National Museum of China, the ancient Zhengyang gate and Arrow Tower as well as the Tiananmen Tower which leads to the well-known Forbidden city.

Then move on to the Imperial Palace, also known as the "Forbidden City" , the largest and best-preserved ancient imperial palaces group with 500 years history. We will buy ticket in advance to skip the line. The palace was built between 1406 and 1420, but was burnt down, rebuilt, sacked and renovated countless times, so most of the architecture you can see today dates from the 1700's and onwards. You will have a highlight tour of the Forbidden City. Afterward, you will end the tour at the north exit of Forbidden City. Please feel free to ask tour guide help you to get taxi or bus to your own next destination.

Note:A current valid passport is required on the day of travel.