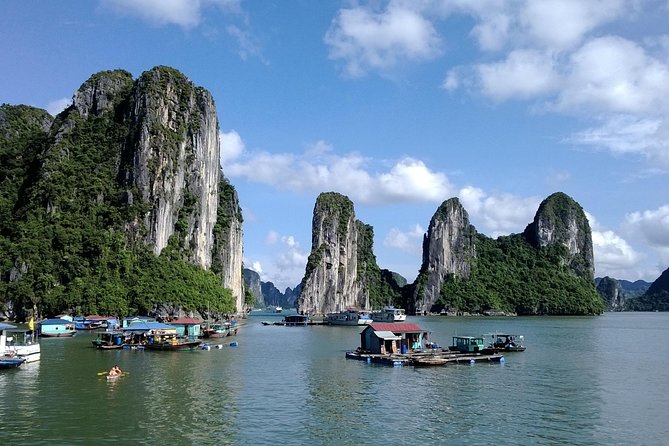 Enjoy this full-day trip to Halong Bay from Hanoi, including a scenic round-trip drive through northern Vietnams rural landscapes. Enjoy a seafood lunch as you take in the magnificent scenery, stopping to explore karsts and caves such as Thien Cung (Heavenly Cave) with an experienced guide.

After pick-up, you will depart for Halong Bay. The drive to Halong Bay is approximately a 3-hour journey. Along the way relax and enjoy the stunning scenery of the peaceful villages, farm workers in their green fields, herding their water buffalo and trading garden herbs by the side of the road. You'll make a rest stop at a halfway point before continuing to Halong Bay.

Arriving in Halong Bay, board your traditional wooden junk for your day cruise on the bay. Sailing around the stunning natural wonders of Halong Bay with thousands of gorgeous limestone cliffs jutting from its calm jade waters (such as: Dog Rock, Incense Burner, Fighting Checking islet...). the UNESCO World Heritage site offers spectacular scenery for a relaxing excursion.

While on board, you will be served set menu lunch with plenty of seafood dishes. After lunch, enjoy stops to explore 2 water caves at Ba Hang Floating village for kayaking or bamboo boat activities. Then continue cruising to Dau Go island for hiking to Thien Cung (Heavenly Cave) with your experienced guide during an hours

Head back to the shore and re-board the bus for your relaxing drive back to Hanoi. Your tour ends back at your Hanoi hotel at approximately 8:00pm - 8:30pm

Hotel pickup (pick up and drop off at hotels in Hanoi Old Quarter area, Hoan Kiem district only. otherwise kindly go to our office at No 9 Hang Huong at 7:45am or contact our hotline after making reservation for best arrangement)

0.5L bottled water on bus per person per day

Bamboo boat or kayaking (you can choose 1 of 2 activities)

What not mentioned inclusions

Tour is not suitable for children below 2 years old

Sunscreen, a hat, and comfortable shoes are recommended

Tour itinerary could be changed due to weather condition without notice in advance. you will be offered an alternative or refund

The drop-off point is back at the original pickup point on Monday, Tuesday, Wednesday, Thursday

There is only 1 drop-off point (the Thang Long Water Puppet Show Theatre at 57 Dinh Tien Hoang, Hoan Kiem) if the tour departs on Friday, Saturday, or Sunday - due to the Night Market on the weekend in Hanoi Old Quarter Area because most of the street in the Hanoi Old Quarter area does not allow vehicles, and is only for walking

If you book Private Tour, Surcharge 15usd/pax if you travel during Lunar New Year from Feb 4th 2019 to Feb 8th 2019. Kindly pay directly 15usd/pax in CASH for tour guide when he/she comes to pick you up.