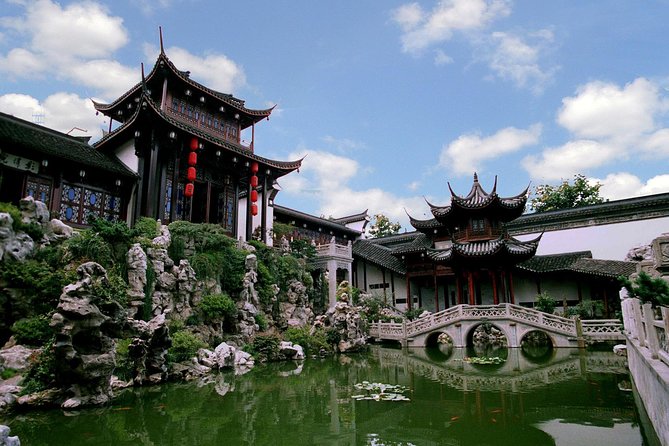 Located in Jiangnan areas, Hangzhou, as one the seven capitals of ancient China and the center of politics, culture and economy of Zhejiang Province, still retains many traditional Jiangnan residences. Join Hangzhou architecture tour with your private guide and private driver to appreciate characteristic Jiangnan residences and modern buildings.

Pick up service can be arrange at your hotel lobby or Hangzhou train station, you will meet our guide holding a welcome sign on time, then starts the Hangzhou day tour as below:

The first stop is the Guo's Villa. It is a special garden-like villa featuring elegance and quietness. As it is named after a certain Guo Shilin, it is called Guos Villa. Dating back nearly 140 years to the Qing Dynasty, it covers an area of 9,800 square meters. Two sections constitute Guo's villa, the northern section is a garden section called Sky in the Mirror and the southern one is a residential section, called Living in Quietness. It features a pavilion-style house with a courtyard.

Next, visit the Meijiawu Tea Culture Village. Located in the west of West lake scenic area. It's a village of over 600 years history. It's also the biggest natural village where the world-famous West lake Dragon Well Tea is produced. Besides its extraordinary tea and tea culture, Meijiawu Village is also renowned for its idyllic scene which can seldom be seen in urbanized world. The present Meijiawu Village consists of eight tourists sections, including the tea culture tourist center, the rural leisure tourist area, and a fishing village.

After lunch, visit the Former Residence of Hu Xueyan. Hu Xueyan (1823-1885), a Hangzhou celebrity, was one of the richest and most famous businessmen in the Qing Dynasty (1636-1911). Situated in downtown Hangzhou, the Former Residence of Hu Xueyan is a place to peek into the aristocracy of Hangzhous richest merchant, hailing from the Qing Dynasty. It is a maze of towers, gardens, pavilions, terraces, arched bridges, palatial halls and serene living quarters. It featuresancient Chinese culture manifested by its stunning architecture, philosophy and bewildering folklore customs, which are still alive.

The last stop is Qianjiang New City. Known as the central business district of Hangzhou, which perfectly infuses the features of the historical and cultural city - Hangzhou with the grandeur of the Qiantang River. It features high-rise modern buildings, the tallest measuring over 300 meters.Over the years, Qianjiang New City has contributed a lot to the development of the city in multiple fields like business, finance, trade and tourism.

After the tour ends, drive you back to your hotel in Hangzhou or the Hangzhou train station.