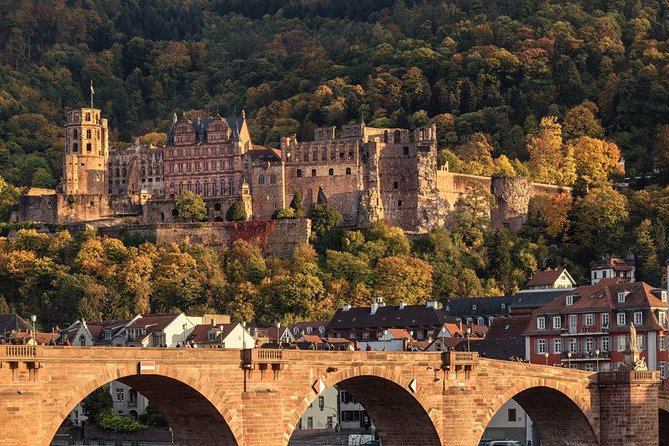 Visit the romantic city of Heidelberg on this superb half-day trip from Frankfurt. With an expert guide to show you around, you will explore the ruins at Heidelberg Castle and discover the city's Old Town, home to Renaissance period buildings, the Karl Theodor Bridge and Heidelberg University. As you will travel by an air-conditioned vehicle, it will be a comfortable and hassle-free experience.

After boarding your luxury coach in central Frankfurt, you will travel approximately 50 miles (80 km) south to the lovely city of Heidelberg. Often described as Germany's most beautiful city, Heidelberg will greet you with pretty Renaissance buildings, framed by vivid green hills on both sides of the River Neckar.

- Heidelberg Castle perches over the city, and a visit to its famous ruins will undoubtedly be a highlight of your half-day trip. The evocative castle was created as a combination of several buildings clustered around a courtyard, each one representing different styles of German architecture. you will also enjoy panoramic views over Neckar Valley from an elevated viewpoint.

- Back in Heidelberg itself, you will take a walk around its medieval Old Town to see the famous Old Bridge (Karl Theodor Bridge) and the beautiful Church of the Holy Spirit. See Heidelberg University, which is Germany's oldest, before relaxing on your hour-long journey back to Frankfurt.

Please note: Should you be lucky enough to be on the Heidelberg half-day trip between November 23 and December 22, you will also visit the Heidelberg Christmas Markets. The Christmas Markets in Heidelberg feature over 140 beautiful wooden stalls bearing handmade gifts and baked goods. You will have time to shop at leisure and sample delicious food before returning to Frankfurt.