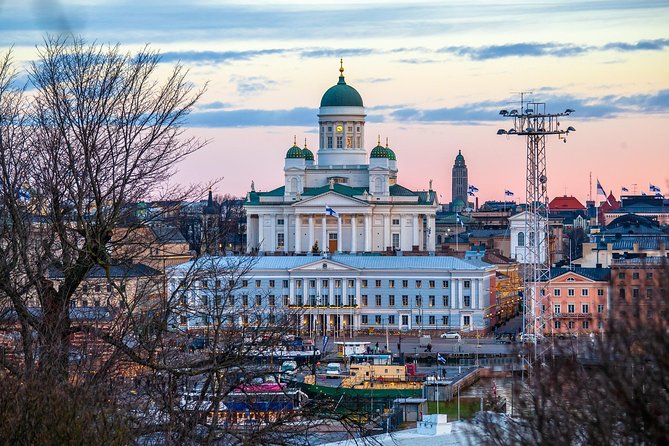 Helsinki is the capital of Finland, but also the country's most important center for politics, education, finance, culture, and research. Although did you know the city possesses a glorious heritage? On this tour, you will have the chance to walk by the Uspenski Cathedral, Finland's oldest indoor market, and the artistic Esplanadi. Nonetheless, places of knowledge are part of this journey, as the University of helsinki or the Parliament house. Finally, you will be able to enter into the most astonishing church in the country: the Church of the Rock.

Itinerary
This is a typical itinerary for this product
Pass By: Uspenski Cathedral, Kanavakatu 1, 00160 Helsinki, Finland
The Uspenski Cathedral will be a marvelous opening of this tour. Built in the 19th century, the cathedral is set upon a hillside, giving a vast panorama of Helsinki. You will love this view as well as its crypt chapel. The Uspenski Cathedral is the main cathedral of the Orthodox Church of Finland.
Pass By: Kauppatori, Helsinki 00170 Finland
You will now walk by Helsinki's most famous and international market: the Market Square. Located at one end of the Esplanade Park, the Market Square is full of food and treats stalls. There are also great handicrafts and souvenirs you'll be able to purchase. The Market Square is a meeting point as well as a place for new wonders.
Pass By: Old Market Hall, Etelaranta Along the South Harbor, Helsinki 00130 Finland
The Old Market Hall is a great place to go during winter or a rainy day. At Finland's oldest indoor market, you will find here traditional treats sold by local vendors. Helsinki's citizens usually come here to do their groceries. From seafood to meat, delicious bread to delicacies, the Old Market Hall is a living place, ideal to taste the Helsinki's most famous cuisine.
Pass By: The Esplanadi Park, Pohjoisesplanadi, Helsinki 00130 Finland
Also known under the name Espa, the Esplanadi can be considered as an open-door art gallery. This urban park has been designed by the famous architect Carl Ludwig Engel, and contains Engels Teater, the first theatre of Helsinki. Here and there are public art creations, plus an outdoor stage where many live music shows can be observed.
Pass By: Helsinki Cathedral, Unioninkatu 29, Helsinki Finland
Helsinki Cathedral is located in the center of Helsinki and is a significant monument of the city. You will be able to recognize it easily thanks to its unique architecture. This neoclassical cathedral consists of a tall green dome surrounded by four smaller domes. It has been designed by Carl Ludwig Engel, just like the Esplanadi and other buildings in the city.
Pass By: University of Helsinki (Helsingin Yliopisto), Yliopistonkatu 4, Helsinki 00100 Finland
The University of Helsinki is a place of knowledge. As the oldest and biggest university in Finland, you can find here 11 faculties and 11 research institutes. But more than a university, you will be able to walk by its famous libraries and museums like the Finnish Museum of Natural History. Beautiful buildings can be found here, as well as a panorama of the Senate Square.
Pass By: Helsinki Central Railway Station, Kaivokatu 1, Helsinki 00100 Finland
The Central Railway Station is the main station on the Helsinki Metro. This station is an interesting place to wander by, as it is one of the original metro stations. Opened in 1982, it was designed by three great architects: Rolf Bjrkstam, Erkki Heino, and Eero Kostiainen. German signs written on the walls are stating Hauptbahnhof.
Pass By: The Parliament House, Mannerheimintie 30, 00100 Helsinki, Finland
As the seat of the Finnish Parliament, this building shows an amazing design. It is a stripped classical style monument, combining neoclassicism and 20th-century modernism. The outside is made of a fine red Kalvola granite, and the faade is lined by fourteen columns with Corinthian letters. The Hall of State is the most popular section of the Parliament House.
Pass By: Temppeliaukio Church, Lutherinkatu 3, Helsinki 00100 Finland
As the last step of this tour, the Church of the Rock will certainly become your favorite place in Helsinki. Opened in 1969 and designed by the brothers Timo and Tuomo Suomalainen, the Rock Church is a piece of art. The indoor has been built directly out of solid rock which gives an amazing acoustic quality to the church. You will be astonished by the beautiful rock walls and the copper dome of this church.