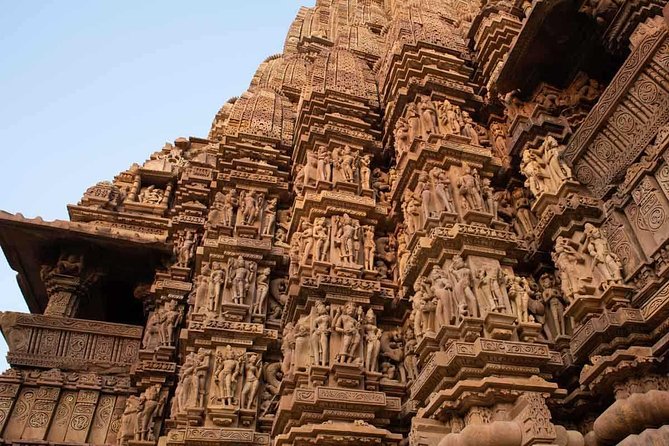 Explore the magnificent beautiful sculptured temples of Buddhist, Jain and Hindu temple shrines. Get a perfect tour to this UNESCO site with private story-tellers who will brief you with all the great facts and features of this heritage city and its temples.

Itinerary
This is a typical itinerary for this product
Stop At: Khajuraho Temples, Khajuraho India
This privately designed heritage trip will start with your driver picking you up from your hotel at 8:00 in the morning. This collection of Hindu, Buddhist or Jain temples are famous for their amazing sculptures and carvings, inclined symbols and signs and nagara-style architecture. Its unique and marvelous architecture has placed it in the lists of UNESCO sites of World Heritage. Built-in early 10th -12th century these temples are marvellous pieces of architecture in current time.
These sensational sculptures and architecture depict the massive passion, amazing music, dance, and other creative arts and their geniuses of Chandela dynasty. Situated in the state of Madhya Pradesh this group of temples numbered to 85, out of which only 20 has survived over this long period of time. Presently these are distinctively divided into two groups as Western and Eastern group of temples.
This cluster of temples is believed to connect with an interesting story of Chandela dynasty. It is said that the Moon God attracted and physically connected to a beautiful Brahmin girl, Hemvati in desire and passion. This resulted in the birth of Chandravarman, the founder of the Chandela Dynasty. Once Chandravarman had a dream of his mother requesting him to make a temple picturing the treasure of passion and amazing fantasy to the world. This led to the construction of temples with amazing sculptures in this little village surrounded by mountains of Chatarpur district. Every temple is different from another and two temples amongst them were built of sandstone.

Duration: 4 hours
Stop At: Chausath Yogini temple, Bheda Ghat, Bhedaghat, Madhya Pradesh 483053, India
Built-in the 900 AD, this temple is known to be as the oldest amongst the 20 survived temples. Dedicated to Goddess Kali, this is the only Granite formed temple here.
Duration: 1 hour
Stop At: Kandariya Mahadev Temple, Western Temples, Khajuraho India
Dedicated to Lord Shiva, enshrined with the Shivalinga, this temple is the most typically designed temple with very intense and graceful carvings. Standing 31m high, it is the largest amongst all temples. Exquisite craftsmanship on stone depicts god, goddesses, deities, eternal lovers and celestial maidens.