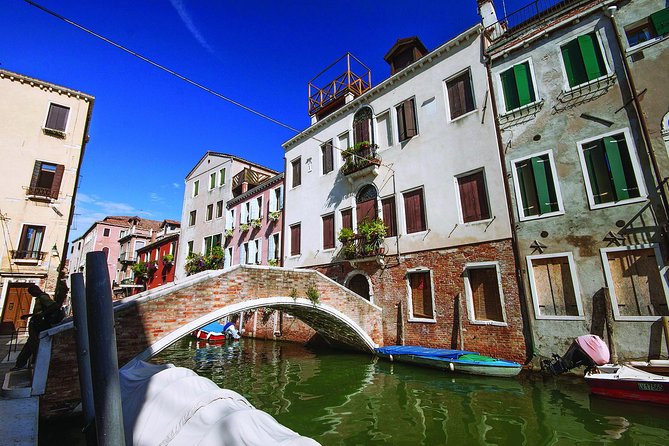 Discover the most unusual corners of Venice on this 1.15 hour afternoon walk. Learn interesting facts about life in the famous water city.Join a professional guide to see relatively hidden sights such as the opera house of La Fenice and the circular Bovolo Stair.

Meet your guide in central Venice for this afternoon walking tour of the city's hidden charms.

There's no better way to discover Venice than by wandering among its alleys and peaceful canals. Away from the crowded areas, Venice is a precious gem to be discovered. Those eager to really explore Venice will find a city that slowly reveals a deeper and more intimate side- a side filled with the people still living there with 'campi' (Venices little squares) and the thriving 'bacari' (local bars).

While strolling around, a passionate local guide will describe the surroundings as well as tell you interesting facts about life in a water city. Venice also has a lot of history and culture, and important highlights will not be missing during the walk.

At first, head towards La Fenice Theater (external), one of the most famous opera theaters in the world, attracting thousands of opera lovers every year. Another hidden gem is the 'Bovolo Staircase,' a stunning staircase inspired by oriental architectures and an example of Venices bond with the East. The Bovolo staircase was named after 'bovolo,' the Venetian word for snail, clearly referring to its original spiral shape. Although pretty hard to find, a visit to this little gem is really worth it.

Stroll around the elegant area surrounding Rialto Bridgeconnecting the Sestieri (districts) of San Marco and San polo. It was a busy crossing area in commercial life back in the day, always crawling with local and foreign merchants. Today, it is the most famous bridge among the ones crossing the Grand canal, and still somehow preserves its ancient charm and atmosphere. In fact, Rialto is still the pulsing center of shops and commercial life in Venice, as well as home to the picturesque food and fish market of the city. You will not actually cross Rialto bridge, but enjoy a beautiful view of the famous bridge from a dock on the Grand canal - photography lovers be ready.

Please note that no refund will be accepted for no shows or late arrivals. The tour will take place also with rain, in the event of exceptional high tide in Venice or heavy rain it might be cancelled by the organizers and refund will be provided