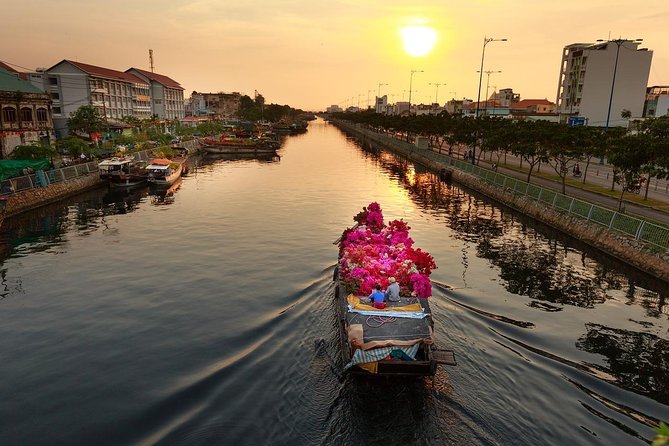 Experience the best of Ho chi minh city on this half-day tour with a knowledgeable local guide. With a small-group of no more than 6 people, visit French-designed architectural landmarks such as Saigon opera house, Central post office and Saigon Notre-Dame Cathedral, and stroll through modern urban streets in the city center. Youll see evidence of the Vietnam War at the War Remnants Museum and learn about the citys transformation from war-torn Saigon to present day. Then, travel by speedboat along the Saigon river at sunset to witness life along the waterway!

Meet your guide upon pickup at your hotel in the afternoon, and hop in an air-conditioned vehicle to explore the highlights of Ho chi minh city. First, visit the citys most popular museum, often frequented by westerners the War remnants museum formerly called the Museum of Chinese and American War Crimes. As you tour exhibits about the Vietnam War, which the Vietnamese refer to as the American War, hear stories of former Saigon from your guide.
Next, visit the Reunification palace, formerly known as Independence Palace, and walk through the eerie, deserted halls with your guide. This symbol of the South Vietnam government was the former home and workplace of the president during the Vietnam War, until the Fall of Saigon during which a North Vietnamese army tank stormed its gates and ended the war.
Afterward, drive to view two French-style architectural landmarks the Central post office and Saigon Notre-Dame Cathedral. The post office, designed by Gustav Eiffel in Gothic style between 1886 and 1891, is Vietnams largest. Admire the interior painted maps of the former Saigon and then enjoy the serene ambiance inside the iconic cathedral, built by the French between 1863 and 1880 on Paris Square and renowned for its neo-Romanesque architecture.
From here, follow your guide on a walking tour of Dong Khoi Street (formerly known as Rue Catinat) a commercial center boasting numerous boutiques, shops, cafs and restaurants. Stroll to the Municipal Theatre of Ho chi minh city, also known as Saigon opera house -- now home to the Ho Chi Minh City Ballet Symphony Orchestra and Opera. Learn how this Gothic structure, completed in 1901 and bombed during WWII, served as a refuge for French citizens fleeing North Vietnam in 1954.
When youve finished exploring Ho Chi Minh Citys downtown and its most famous landmarks, enjoy a speedboat ride along the Saigon river. Your guide will point out the houses on stilts, which line the riverbanks, and tell you about the local people whose livelihoods depend on the river. Feel as though you've traveled back in time as you cruise the waterway depending on the season of your travel, your cruise lets you bask in the warm glow of the sun as it disappears behind the horizon! Then, returning to land by 6pm, youll be transported back to your hotel.
*** This tour is based on group/ SIC only.

Tour based on SIC