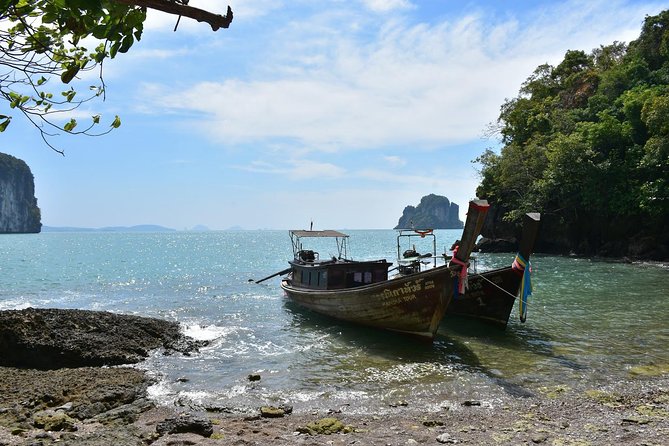 Discover one of the Andaman Sea's most beautiful island on a full-day tour to Hong island from Krabi. Cruise by longtail boat with your guide Mr. Baw into the picture-perfect natural lagoon surrounded by majestic limestone formations. Slip into the water to snorkel over brilliant fish and shallow reefs or paddle by kayak on the calm waters around Koh Hong. Dry off on white sandy beaches and bathe under the warmth of the sun.

Meet Mr. Baw, a hell of a guide, on our Hong island Tour by traditional longtail boat. This trip is an authentic sea adventure on a modified wooden boat with a propeller attached to the end of a long pole powered by an enormous engine (typically one that has been removed from a truck) - somewhat grandiosely known as 'the gondolas of the south'.

Mr. Baw will be the jack of all trades: He will pick you up from the hotel lobby, give you safety instructions and information about the tour at Nopparat Thara Pier, act as your guide, locate the best snorkel spots, swim with you, prepare the lunch setting at the beach of Pakbia Island, show you how to paddle a kayak, make nice photos from you, and just be around if you need any help.

Koh Hong will enchant you right when you step on the island. Part of Than Bok Khorani National Park, Koh Hong features a beautiful sheltered cove with perfect sand beach and many palm trees providing plenty of shady spots to sit back and marvel at the view. Discover every cranny and nook of Hong Islands stunning bays, or bask on the shores and watch for Monitor Lizards, White-Faced Gibbons and brilliant tropical birds.

Hong in Thai means room, and the literal translation of the islands Thai name is the island with the room due to the gorgeous lagoon located in the centre surrounded by mangroves with their incredible root systems. Slide between towering limestone walls that shelter Hong Lagoon and slip into the water to snorkel over brilliant fish and shallow reefs.

If you have booked the kayak option, paddle along the sinuous coastline where lush vegetation and soaring cliffs join the Andaman Sea. You will also get to visit Koh Daeng (Red Island), Koh Lading (Paradise Island) and Koh Pakbia. Enjoy a delicious lunch on a tropical beach giving you plenty of time to take in the beauty of the islands.

This tour is provided by Trip Store Krabi.

Kayak and equipment (only if kayak option has been booked)

There is a National Park entrance fee of 300 THB per adult and 100 THB per child.