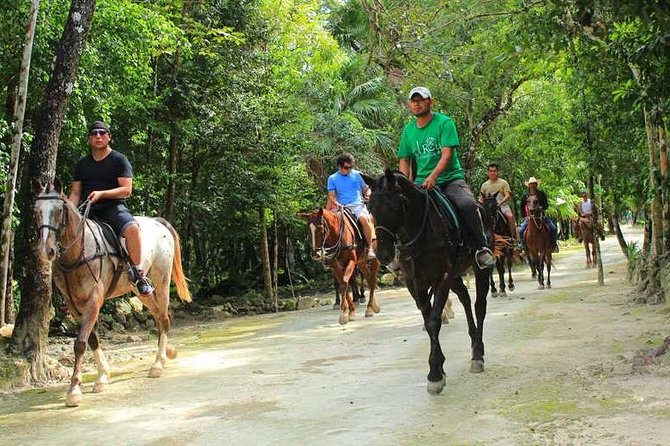 Enjoy riding on an exciting tour through the tropical jungle of Quintana Roo, mangroves rich in flora and fauna, beautiful lakes and private beaches of turquoise waters and white sands. You'll ride through Loma Bonita and have a great time.
Do not miss the opportunity to ride with friends or family, and live this adventure that has no comparison.

You'll be picked up from your hotel or central meeting point and head to Loma Bonita Park where you'll be welcomed by the staff and given all necessary equipment.

You will have the experience to visit the Polo Club, where you will begin the fascinating experience of riding a horse through the jungle. Enjoy the wonderful natural surroundings as you safely ride through the beautiful landscape that characterizes this beautiful forest. The ride can be suited for experienced and beginner riders and your professional guide will make sure you have a comfortable and safe ride.

This is a unique experience where noble horses and relaxing landscapes come together, offering special moments to share with loved ones. Your tour ends with hotel drop-off.

Bring cash or credit card for extra activities, souvenirs and personal shopping, use of video camera.

All children must be accompanied by and adult.

In case of using a wheelchair, we recommend you bring a companion.