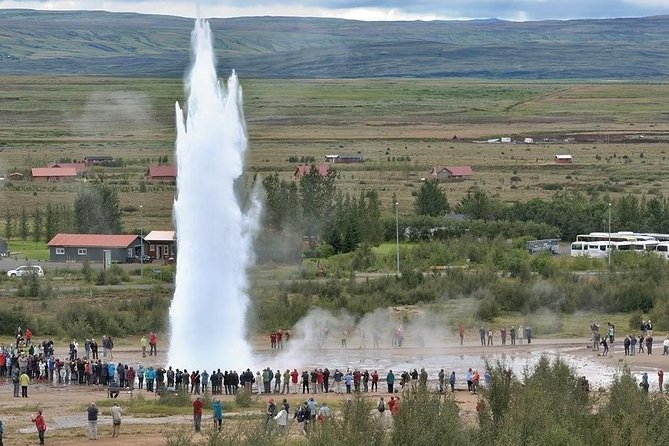 Overview
Experience the best of Icelands fire, water and history on a full-day tour of the Golden Circle in a comfortable minibus. This Colden Circle tour takes you to Icelands most beautiful natural sites and some of the most significant historical places in the southwestern part of the country, like Thingvellir, The National Park, Gullfoss, the famous waterfall, Geysir, the hotspring area with Strokkur the steaming geyser, Sklholt, the old episcopal see and its ruins, and Rauhlar (Red Hill), the rootless cone phenomena wich can only be found in Iceland and on Mars.
Highlights
Full-day, Golden Circle tour in a MINIBUS
Choose a small-group tour for a more personal experience
Visit Thingvellir, The national park, Gullfoss the waterfall, Geysir, the hotspring area
Visit Sklholt, the old bishops sea and Rauhlar, the rootless cone phenomema
Get inside tips from a local guide.

After pickup from your hotel in the morning, you will start your tour by visiting Thingvellir, the beautiful national park that was accepted on the UNESCO World Heritage list in 2004. It was here that the Alingi, the Icelandic Parliament, was was established in the 10th century.

Enjoy the view of the countryside while your tour continues to the magnificent waterfall of Gullfoss. Witness the forces of untouched nature as the water falls down 32 meters in two stages into the craggy canyon. Gullfoss literally means Golden Waterfall, and is extremely beautiful.

Next stop will be the Geysir area which includes several hot springs as well as Strokkur, the geyser which spouts large amounts of water into the air every 10-minues or so, often at heights of 10 to 20 meters above the ground.

Then the tour continues to Sklholt, the old episcopal sea, where you can see among other things an old sarcophagus which dates back to the early 13th century and the beautiful modern day church Sklholtskirkja which is decorated by Icelandic artist.

There will also be an extra stop at the Rauhlar (Redhills) phenomenon which are remnants of a cluster of pseudo-craters. The only other places this phenomenon has been discovered are other places in Iceland and in the Athabasca Valles region of Mars.

Be transported back to you accommodation at the end of the tour.

Free WiFi on board

Free USB charger at every seat

Choose a small-group tour for a more personal experience

Lunch is not included