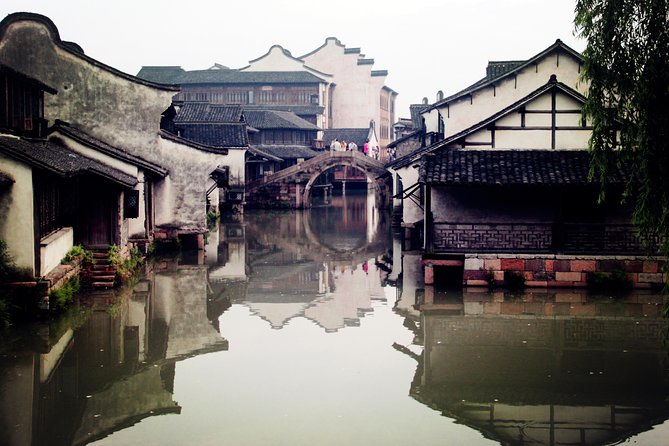 Explore Wuzhen water town is a unique ancient appearance with houses made of black bricks and gray tiles contrasting sharply with the white walls, making it appear like a Chinese ink wash drawing. It is one of the six ancient water towns south of Yangtze with the history of over 1,200 years, was named as a candidate for UNESCO World Cultural Heritage List. Stroll along the stab-stone path, enjoy the highlights of the romantic and tranquil little town, like Hundred-bed Museum, the Former Residence of Maodun and various of workshops. You may have a chance take an awning boat for getting an insight of the charm of the ancient town. Do an authentic Chinese foot massage after full day of sightseeing, which can significantly stimulate the reflex parts in feet.

Get picked up at your hotel lobby or Hangzhou train station and drive to Wuzhenone hour away, which boasts charmingly architectures, crisscross rivers and canal, cherished history, and elegant scenery. Hop in an air-conditioned private vehicle.

Upon arrival in the water town, visit the Jiangnan Hundred Beds Museum,the first museum in China to collect and exhibit ancient beds of the Jiangnan region. This museum holds dozens of examples of finely crafted beds from the Ming and Qing dynasties to modern times. With exquisite design and workmanship, these are more than items of furniture, but excellently preserved examples of Chinese folk art.

Next, pay a visit to the Folk Custom Show Room. This museum displays artifacts used in festivals and celebrations by local people over the centuries. You can learn the interesting wedding, seasonal changes, and life style of local people dating back to the late 19th centuries.

Move on to Sanbai Wine Workshop. This is one of the most famous distilleries in Jiangnan area, dating back to the Ming Dynasty. Sanbai wine is a pure liquor, which made of flour, water, and rice. Here you'll have a chance to witness how it brew and sample one cup of one of the world's finest rice wines.

Continue your tour to Indigo Fabric Workshop, Wuzhen is one of its original manufacturing places. It was first founded in Wuzhen during the 13th century. You can have a look at the production base and distribution center of indigo cloth. Visitors may operate the machines to get an idea of how the original work was carried out over 200 years ago.

Then visit the Former Residence of Mao Dun, a well-known Chinese revolutionary writer. It was the Mao family home for many generations and witnessed the growth of this great revolutionist and writer. In 1988, it was listed as one of the Key State Preserved Relic Units and in 1994 was renamed the Mao Dun Museum of the City of Tongxiang.

Spend some free time on your own for a while at the water town. Then you will be taken back to Hangzhou.

After a long day sightseeing, you will be provided an authentic Chinese Foot Massage, which has been practiced in China since the fourth century BC. Foot massage improves the immune system and keeps the body's natural balance. Besides the health-care method, foot reflexology also can at least cure minor ailments, ease head and stomach discomforts. It is now being looked at in a more favorable way by both the medical community and the general public.

Drive you back to your hotel or the Hangzhou train station and your tour ends.