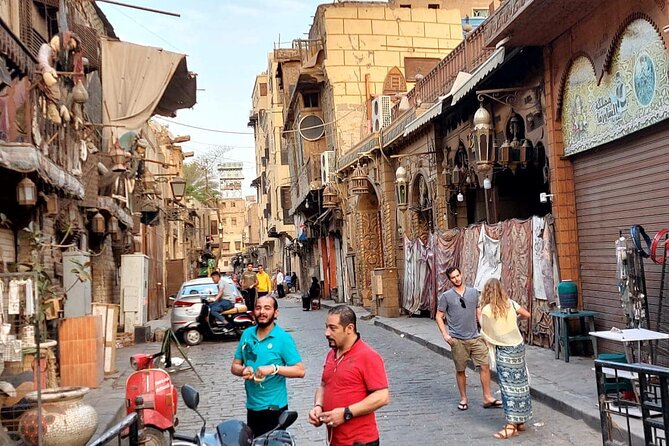 meet our guide at 9 am or any time fit your schedule
then transfer to visit Islamic oldest city in old Cairo
start first with Amr ibn el As who enter Isalm in Egypt and defeated Roman and move the capital from Alexandria to oldest Islamic city called el Fustat
then transfer to visit Azhar mosque from one thousand years ago, The mosque of Al Azhar is the firstislamicuniversity built in Cairo around 1000 years ago and it was the official mosque to have the Friday prayer. It was built by the great Fatimid army leader and the builder of Cairo, Gawhar El Seqelly with the orders of the Fatimid Caliph, Al Mui'z le Din Allah. The building work of the mosque of Al Azhar started in the year 970 AD and it was finished three years afterwards in 972 AD. then khan el khili market
then ranfer to viist ibn tutlun mosque

why it is important to visit
1-It is the oldest intact functioning Islamic monument in Cairo. It is considered the 3rd mosque which was constructed for the whole community or the congregation joined together for the Friday noon prayer.

2- It is also rare preserved example of the art and the architectureof the classical period of Islam.

It is one of the biggest mosques in Egypt. The mosque together with the ziyada occupies an area of 6.5 acres.

The Minaret:It stands on the North side of the Ziyada, where a door leads to it is an unusual stone structure with an outer staircase, and a Mameluk top of the type named Mabkhara. This minaret caused controversy among the Cairo's Architectural historians. We don't have enough sources to clear this point or determine its date.

then transfer back to your hotel