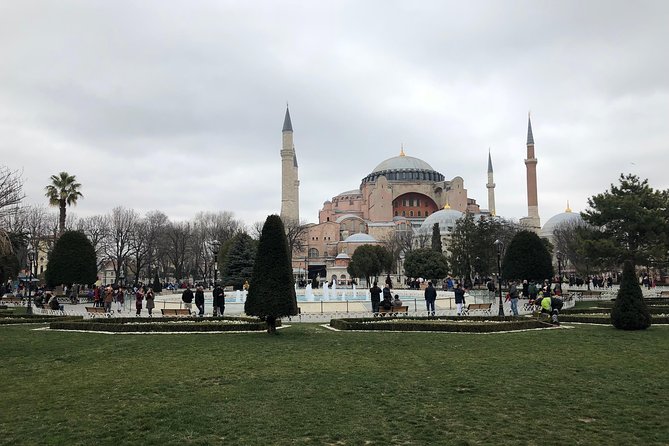 See the most visited highlight of Istanbul city, the mosques, churches, and most photographic parts of the city.

Itinerary
Day 1: ISTANBUL OLD CITY TOUR
Stop At: Topkapi Palace, Cankurtaran Mahallesi Gulhane Park, Near Sultanahmet Square, Istanbul 34122 Turkey
The great palace of the Ottoman sultans from the 15th to the 19th centuries housing an exquisite collection of cyrstal, silver, and Chinese porcelain, robes worn by the sultans and their families.
The famous jewels of the Imperial Treasury, miniatures, the Holy Mantle; enshrining relics of the Prophet Mohammed.
Duration: 2 hours
Stop At: Hagia Sophia Museum / Church (Ayasofya), Ayasofya Square, Sultanahmet, Istanbul 34122 Turkey
St. Sophia This ancient basilica, built by Constantine the Great in the 4th century and reconstructed by Justinian in the 6th century, is one of the architectural marvels of all time.
Duration: 2 hours
Stop At: Blue Mosque, Sultanahmet Mah At Meydani Cad No 7, Istanbul 34122 Turkey
is known as the BLUE MOSQUE because of its magnificent interior decoration of blue Iznik tiles.
Duration: 30 minutes
Stop At: Hippodrome, Binbirdirek, Sultan Ahmet ParkI No:2, Istanbul Turkey
Ancient Hippodrome, the scene of chariot races, with the three monuments; the Obelisk of Theodosius, the bronze Serpentine Column and the Column of Constantine.
Duration: 40 minutes
Stop At: Grand Bazaar Jewelers, Alemdar Mah. Bab-I Ali Cad. Guran Han No:34 D. 4 Fatih, Istanbul 34110 Turkey
In this labyrinth of streets and passages are more then 4,000 shops with each trade having its own area: the goldsmiths street, the carpet sellers, Turkish arts and crafts, such as handpainted ceramic plates, hand-honed copperware, brassware and trays, water ewers, onyx-ware and meerschaum pipes.
Duration: 2 hours
Meals included:
Lunch
No accommodation included on this day.
Day 2: ISTANBUL BOSPHORUS CRUISE AND SPICE BAZAAR TOUR
Stop At: Bosphorus Strait, Istanbul 34122 Turkey
Bosphorus by Boat a traditional excursion by boat along the waterway separating Europe and Asia..
Duration: 1 hour
Stop At: Misir Carsisi (Spice Market), Rustem Pasa Mahallesi, Erzak Ambari Sok. No:92 Eminonu - Fatih, Istanbul 34116 Turkey
see local spice and turkish delight sellers
Duration: 2 hours
No meals included on this day.
No accommodation included on this day.
Day 3: FULL DAY DOLMABAHCE FENER AND BALAT TOUR
Stop At: Dolmabahce Palace, Visnezade Mahallesi Dolmabahce Cd, Istanbul 34357 Turkey
Learn all you need to know about the Ottoman Empire on a 2 hours tour of Dolmabahce Palace, beautifully situated on the banks of the Bosphorus Strait in the Beikta district of Istanbul. Built in the 19th century on an old bay of the Bosphorus where the Ottoman fleet would anchor, the palace was the administrative center of the Ottoman Empire and home to the last of the sultans.
A licensed guide will take you on a tour of the palace complex, explaining its history and function. Hear annecdotes about a youthful Ataturk, father of the Turkish Republic, and how he would welcome foreign guests for international conferences and other state functions
Duration: 1 hour 30 minutes
Stop At: Fener Rum Patrikhanesi, Dr. SadIk Ahmet Cd. No:44 Yavuz Sultan Selim Mahallesi, Istanbul 34083 Turkey
This neighborhood was once home to the Greeks and their houses are typically Greek style. The Greek Fener Rum Lisesi high school: the building of magnificent and unique red brick, Fener dominates from the top of the hill.
Duration: 1 hour
Stop At: Balat, Istanbul Turkey
it is a neighborhood traditionally inhabited by Jews until they immigrated to Israel in the twentieth century. Bus rides with panoramic views of the walls of Theodosius: where the Byzantine Emperor Theodosius II walled the seven hills of Rome to protect the new city of Attila the Hun and the Bulgarian Orthodox Church of Saint Stephen, and their beauty is visible dominant from a distance. It is completely made of cast iron, although it seems stone. It is one of the few cast iron churches around the world that are preserved in their original format.
Duration: 1 hour 30 minutes
Stop At: Suleymaniye Mosque, Prof. SIddIk Sami Onar Cd. No:1 Sleymaniye Mah, Istanbul 34116 Turkey
considered the most beautiful of all imperial mosques in Istanbul. It was built by Sinan. It was in the gardens of this complex where Roxelana Suleiman and his wife did build their mausoleums, and nearby Sinan built his own tomb.
Duration: 1 hour
Meals included:
Lunch
No accommodation included on this day.
Day 4: FULL DAY PRINCE'S ISLANDS TOUR
Stop At: Buyukada Tabiat Parki, 06510 Turkey
we proceed for Full day Princess Island tour including visit to Buyukada which is the biggest island of the chain of 9 islands. Youll have chance to take horse carriage and enjoy the natural beauties of island. In the afternoon Return to your hotel,
Duration: 6 hours
Meals included:
Lunch
No accommodation included on this day.