Istanbul To Ephesus And Pamukkale Overnight Tour For 3 Days

Istanbul To Ephesus And Pamukkale Overnight Tour For 3 Days 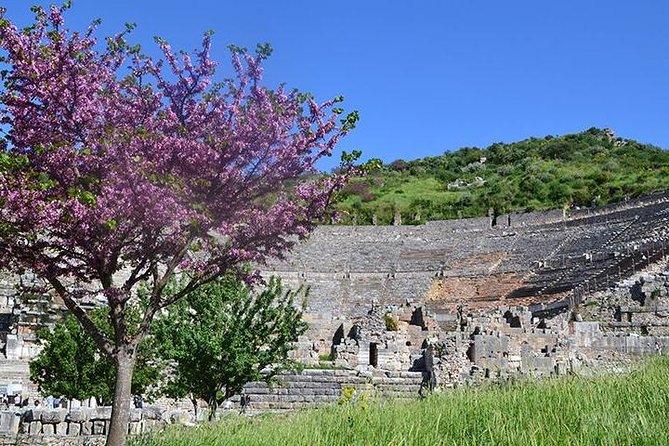 Istanbul to Ephesus and Pamukkale Overnight Tour for 3 days

You will meet with your guide in the hotel in Istanbul and transfer to airport for your flight to Izmir.

First you will explore the site and remains of the Temple of Artemis, also known as the Temple of Diana. Once considered one of the 7 wonders of the ancient world, this grand temple was destroyed in the 5th century.

You will meet with your tour guide at the hotel and transfer to Airport for your Izmir flight .

As you arrive the airport your vehicle will be waiting for you to transfer directly to Ephesus site .

See the ruins at the site of this once-great temple, and admire pieces of impressive ancient Greek architecture.

Next on our itinerary is the House of the Virgin Mary. This Christian shrine is believed to be the stone house that Mary was taken to by Saint John, and where she lived until her death.

You will be offered a substantial lunch prior to the afternoon programme.

After exploring other historical sites, such as the magnificent remains of the Library of Celsus or the 6th-century Basilica of St. John, you will be driven to Artemis Tample ruins then you will be taken to Kusadasi for overnight.

Next day of your tour , depending on your tour program which you have decided with your tour guide , will proceed.

You will walk around the Kusadasi town .Kusadasi is one of the popular touristic town on Aegean region of Turkey.
You will have a chance to discover the city and see pigeon island and fortification , caravansary and old Kusadasi houses with your tour guide .

On this magnificent day you will drive to get to experience the natural travertine terraces of the Pamukkale ,UNESCO World Heritage Site as well as the Hierapolis archaeological zone, an Ancient Roman resort city with the largest necropolis in Asia Minor.

The rock formations of Pamukkale (literally, "Cotton Castle") are a series of white terraces saturated with dissolved calcium bicarbonate, bubbling up from the feet of the mountains beyond. As the water flows over the edge of the plateau and cools, carbon dioxide is given off and calcium carbonate precipitates as hard chalk or travertine.

The Hierapolis archaeological site lies west of Pamukkale Koyu. Its main features include a temple of Apollo and the adjacent Plutonium, a cavern emitting a deadly sulphur and carbon dioxide gas.

East of here is a restored Roman amphitheater, dating from the second century AD.

Then according to your flight departure time ,you will be transferred back to airport to flight to Istanbul.
The tour will end with a drop-off at  Airport or transfer back to your hotel in istanbul depends on your preferences.

Overnight accommodation at 5* or 4*Hotel (according to Hotel availability