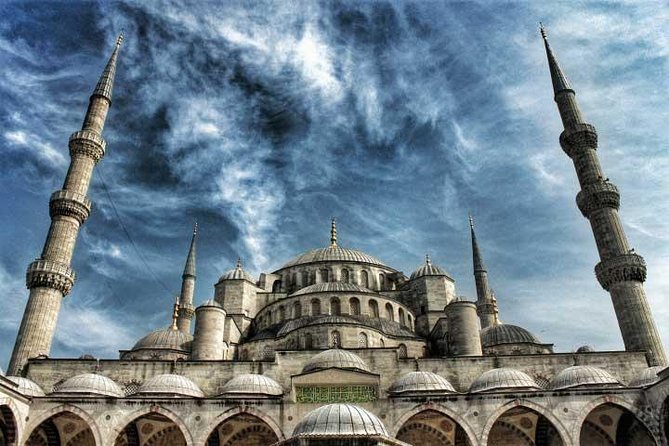 Explore Istanbul's UNESCO-listed Old City on this small-group, 8-hour walking tour. Admire the opulent Topkapi Sarayi, home of the Ottoman sultans, Hagia Sophia, once the largest church in all of Christendom, the 17th-century Blue mosque, and the Roman-era Hippodrome, before soaking up the atmosphere of the vibrant Grand bazaar. Please note that Tuesday tours exclude Topkapi Sarayi and substitute Yerebatan Sarayi (Basilica cistern) and the Spice market, while the Grand bazaar is closed on Sundays.

Your guide will collect you from your hotel on the European side of Istanbul around 8-8:30am, and accompany you to the Old City on public transport in time for the start of the tour at 9am: if you're staying in the Old City, your guide will walk with you on foot. This is a small-group tour, with a minimum of two people and a maximum of eight.

You'll start your walking tour at the Topkapi Sarayi, the rich palace that was home to the Ottoman sultans, their harems, and their eunuchs for almost four centuries. (This closes on Tuesdays, so you'll visit the Yerebatan Sarayi (Basilica cistern) and Spice market instead.)

Next, stroll down a lovely alleyway lined with Ottoman-era houses to the Hagia sophia, where your guide will amaze you with its history and legends. During the sixth century, this was the largest church in all of Christendom, and one of the largest buildings in the world: the vision of Emperor Justinian and his architects still holds.

From here, walk to The blue mosque, commissioned by Sultan Ahmet I and completed in 1616. Marvel at the rich interior, crafted from 17th-century hand-made blue Iznik tiles, that gives the building its name. You'll break for lunch whenever the group feels ready your guide can escort you to some excellent Sultanahmet restaurants.

Step back many centuries on your next stop, the Hippodrome, Constantinople's political and entertainment epicenter during the Roman and Byzantine eras. Your guide will explain the thrilling chariot races that happened here, and their political significance.

Finally, walk to the Grand bazaar to soak up the atmosphere (please note this is closed on Sundays). You can either stay to make the bargain of a lifetime, or head back to your hotel: most groups finish their tour around 4:30pm.

Pickup from hotels on European side of Istanbul