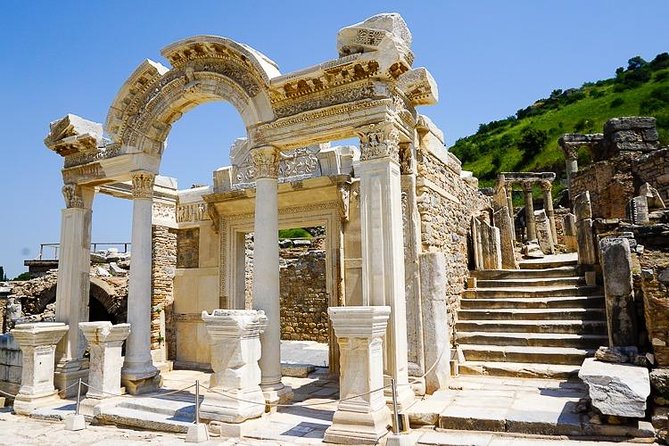 Izmir Afternoon Tour of Izmir-turkey/Ephesus">Ephesus and Terrace Houses is providing you to avoid from early crowd of the sites.
If you do not want to get up early and gether,this is the perfect opportunity to learn Ancient Ephesian life culture and prosperity afternoon.
Visit
Ephesus (a UNESCO World Heritage Site)
Terrace Houses
Panoramic Selcuk Castle , Basilica of St. John , Isa bey mosque and Artemis Temple

Izmir Afternoon Tour of Ephesus and Terrace Houses  provides you to discover the Ancient Ephesus, a UNESCO World Heritage Site, is one of the greatest outdoor museums in Turkey and perhaps in the world.

You will have panoramic drive from Izmir to selcuk . When you arrive Selcuk you will see  Selcuk Castle , Basilica of St. John , Isa bey mosque and Artemis Temple Panoramicly

Although now in ruins, it was originally founded by the Carian and Leleg native peoples.

Your two-hour walking tour begins after a 30-minute drive from the pier. Magnificent vistas await including the glorious Celsus Library façade, the Grand Amphitheater and the Temple of Hadrian.

The Terrace Houses owned by the wealthy and influential lie opposite Hadrians Temple, in a newly excavated section.
Their fine decorative mosaics and frescoes give a fascinating insight into ancient lifestyles.
Terrace Houses on the slopes of Bulbul Mountain are accessed by steps, with their roofs forming terraces for those houses above them.

Then you will have a chance to see cultural demonstration and try Turkish tea,coffee in a weaving center.

You will have enough time to spend more time on your own in the city center after the tour.

Full Insurance For The Duration Of The Tour.

Round Trip Transfer In Luxurious Vehicles.