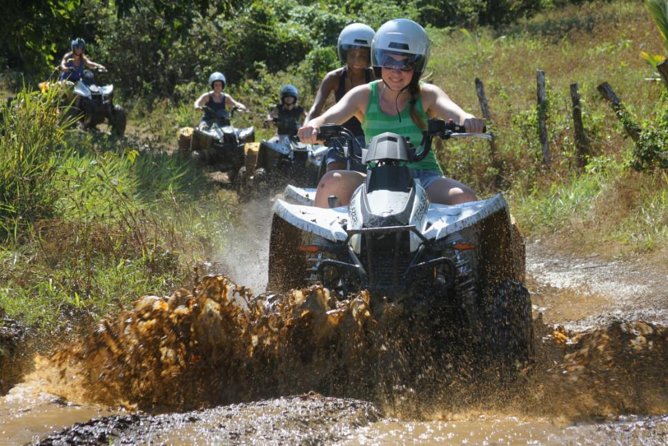 Follow the call of the wild with this exhilarating ATV (all-terrain vehicle) off-road adventure from Montego bay or Negril. Travel to a safari ranch in beautiful Sandy Bay, and board your rugged four-wheel bike for a thrilling tour of Jamaicas lush countryside. Zip past citrus groves and farming villages, bump through puddles, rumble through a colonial-era estate and climb to a mountain viewpoint for spectacular views. Stop for photos, see Jamaicas flora and fauna on route, and perhaps finish with a tasty lunch (own expense) at the ranch restaurant.

Start your safari experience with a pickup from your Montego Bay or Negril hotel. Board your air-conditioned minibus or coach and travel to the safari ranch in Sandy Bay.
When you arrive, get a safety briefing and tour rundown from an instructor. Learn how to drive your ATV, watch a demonstration, and strap on your helmet for a practice ride. Once you feel confident on your four-wheel bike, set off on your adventure with an experienced guide leading the way!
Rumble through the rugged countryside and as you gain confidence, pick up speed on your bike. Splash through puddles, speed past citrus plantations, roar up and down hills, and thrill as you bump along the twisting dirt trails.
Journey through the lush plains of the Blue Hole Estate, pass the beautiful community of Cascade in the parish of Hanover, and trundle by the farming village of Smithfield. Pause at one of the islands oldest Presbyterian churches, built by slaves in 1840; and climb through forested slopes to a mountain viewpoint, at 2,200 feet (670m) above sea level, to admire the panoramic views.
Along the way, discover some of Jamaicas native flora and fauna, and hear from your guide how some plants are used in the islands beloved herbal remedies.
When the time comes, return to the safari ranch. Leave your ATV and perhaps revive your energies with a meal or drinks (both at own expense) at the ranch bar and grill.
Then, relax on your return journey, where your tour ends with a hotel drop-off.

Only one person per ATV is allowed

Money for lunch, drinks and souvenirs at the ranch