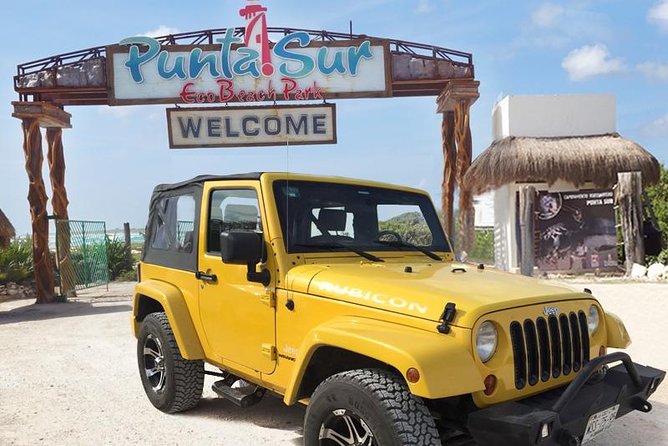 Enjoy driving a jeep around the island of Cozumel and admire its beautiful views and culture. You'll have a chance to do some snorkeling in a wonderful coral reef and visit a tequila museum and Punta Sur. You'll also enjoy a delicious lunch by the beach.

After hotel or port pickup in Cozumel you'll head to a beach club for a wonderful snorkeling experience at a beautiful reef led by a professional dive master.

Continue your way as you enjoy thegreat views of the south part of the island on the way to the Beach Club where you will enjoya delicious Mexican lunch and spend some time at spectacular beach surrounded by white sandy beachesbefore heading to Cozumel downtown. Here you can have time for shopping to then go back to the pier or to your hotel.

Jeep Car for 4 people so everybody gets the chance to Drive.

Soft Drinks, water, and beer (after the snorkel only)

Drinks at the restaurant

Minimum age to snorkel is 7 years

Minimum age to drive is 18 years

Please bring a change of clothes, cash (for marine park tax, tips and souvenirs), a towel, a swimsuit, sunscreen and a camera