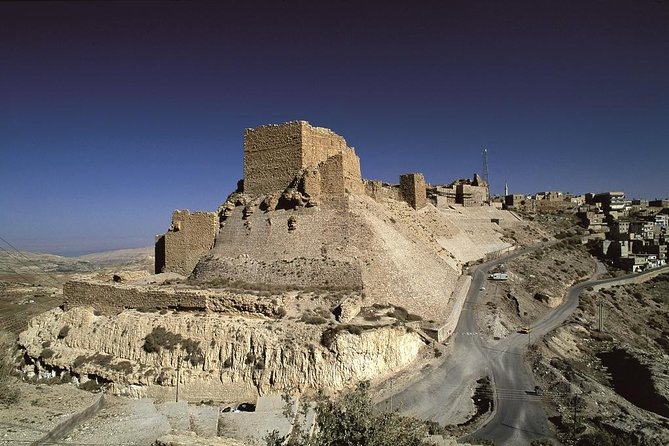 Many tours of Jordans castles spotlight either the countrys Crusader fortsor its medieval Islamic desert castles. This convenient full-day private tour from Amman combines both groupsof castles in one day. Visit the Crusader fortress of Kerak and after a lunch break, view some of Jordans eastern desert castles, including UNESCO-listed Qasr Amra. Private transport, hotel pickup and drop-off and entrance fees are included, with lunch and local guides at own expense.

After early morning pickup at your Amman hotel, set off with your driver in a private air-conditioned vehicle. Be sure to bring a sun hat and camera.

Absorbthe views as you venture south into Jordans desert landscapes. Your driver will not act as your guide: instead, you may choose to explore each site independently, or hire a local guide (own expense) at the many sites where they are available.

Stop first at the walled town of Kerak, standing 2,952 feet (900 meters) above sea level, and dominated by Kerak Castle, one of the Middle Easts largest Crusader castles. Built in the 1140s by King Baldwin I of Jerusalem, this hilltop fortress resisted Saladins forces for decades before succumbing in 1189.

Head up to the castle, and explore on your own, or with a guide (own expense). Walk through the grounds, and view the Crusader architecture of vaults, corridors, and doorways built from dark stone. Visit the main tower, underground galleries, and church, and see the later Arabic additions oflight limestone. Delve intothe on-site archaeological museum, and admire the views from the courtyard to the Dead sea.

Then, reconvene with your driver and explore Kerak town, seeing its 19th-century Ottoman houses and shops. Browse for souvenirs and if you wish, visit a local restaurant for a traditional Jordanian lunch (own expense) of mansaf (lamb with yogurt and rice) or other dishes.

Next, head east of Amman to see some of Jordans famous desert castles. Commissioned by the 7th- and 8th-century Umayyad caliphs, these buildings served as fortresses, pleasure palaces, caravan inns, and hunting lodges. View some of the castles, and finish at the best-preserved: UNESCO-listed Qasr Amra, famous for its 8th-century frescoes.

Your tour concludes with a late afternoon drop-off at the departure point in Amman.