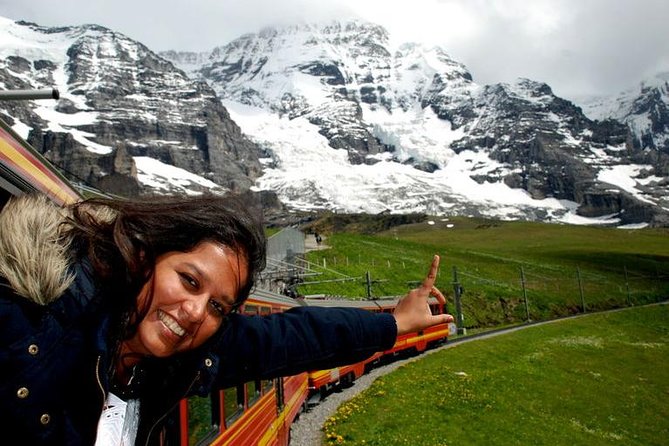 Embark on a spectacular Alpine journey from Zurich to the Top of Europe! Travel by coach through the Bernese Oberland in Switzerland's magnificent Jungfrau region, then hop aboard a cogwheel train and ride up to Jungfraujoch, Europe's highest railway station at a staggering elevation of 11,333 feet (3,454 meters). Book this tour right away because stunning panorama of snow-capped mountains and glaciers awaits you!

Board a coach at the central Zurich bus terminal and soak in the scenery as you drive 2 hours south through Switzerland's beautiful Bernese Oberland to Lauterbrunnen. Here hop on a cogwheel train for a ride up the Alps via the Kleine Scheidegg mountain pass.

Climb up, up, up, savoring views of the towering mountains around you, until you reach Jungfraujoch. And now you are officially at the highest train station in Europe, at an elevation of 11,333 feet (3,454 meters)! At the Top of Europe, experience a breathtaking panorama of the Swiss Alps enveloped in eternal snow and ice.

Walk through the heart of a glacier in the Ice Palace, overlook the Aletsch Glacier (Europe's longest glacier) from the sweeping Sphinx Observatory and spot the snow-capped peaks of neighboring France and Italy beyond. Grab a drink or a bite to eat at the panoramic restaurant if you wish.

After your time at Jungfraujoch, ride the cogwheel train back down to Lauterbrunnen, where your coach awaits for the 1-hour drive back to Zurich. Arrive at the Zurich bus terminal in the evening.