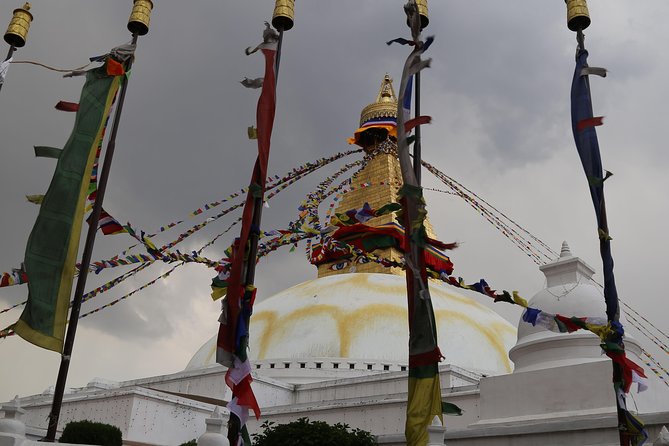 Kathmandu UNESCO day tour is the best option to explore Kathmandu valley within a single day. The tour gives the idea of cultural, historical, economical, social and religious aspects of Nepal from centuries back to till date. You will explore the major attractions of Kathmandu valley, UNESCO heritage sites and major tourist attractions namely Kathmandu Durbar square, Swyambhunath (The Monkey Temple), Pasupatinath (The Cremation Site) and Boudhanath Stupa. During the tour you will see the local market, city, people and their lifestyle, historical temples and buildings, centuries old monuments and many more. Book your tour with Massif team to experience the amazing tour of Kathmandu with expert and knowledgeable local guide that helps you to know more about Nepal and Nepali people.

Our tour guide will pick up you from your hotel with private vehicle and take you for the tour of the valley. You will be visiting Swyambhunath, Kathmandu Durbar square, Pasupatinath and Boudhanath.
Swyambbunath / Monkey Temple :- The huge gold plated Vajra thunderbolt set in the east side of the stupa, Buddha statue on the west side of Swayambhu, The Sleeping Buddha, The Dewa Dharma Monastery, noted for a bronze icon of Buddha and traditional Tibetan paintings, The temple dedicated to Harati, the goddess of all children. It is said that she was an ogress before Lord Buddha converted her to be the caretaker of all children. Throw the coin and know your luck etc.
Kathmandu durbar square:-Durbar square was surrounded with spectacular architecture and vividly showcases the skills of theNewarartists and craftsmen over several centuries. Centuries old historical and cultural monuments are the major attraction of the place though several buildings in the Square collapsed due toa major earthquake on 25 April 2015. Still there are lot to see and lot to know. Besides that the Living Godesses- Kumari is the major attraction of the square. Temples, Royal palaces, courtyards, temples and many more to see in Kathmandu durbar square.
Pasupatinath:-Dedicated to Lord Shiva, Pashupatinath is one of the four most important religious sites in Asia for devotees of Shiva. Built in the 5th century and later renovated by Malla kings, the site itself is said to have existed from the beginning of the millennium when a Shivalingamwas discovered here. Pashupatinath is also one of the very few living cultural heritage sites in the world. Unlike other cultural sites or museums, Pashupatinath is centre of energy with active participation of people all times of the day, every day.Experience this highly recommended religious hub for a mix of religious, culturaland spiritual experiences. Located 3 km northwest of Kathmandu on the banks of the Bagmati River, the temple area also includesDeupatan, Jaya Bageshori, Gaurighat (HolyBath), Kutumbahal, Gaushala, Pingalasthanand Sleshmantak forest. There are around492 temples, 15Shivalayas(shrines of Lord Shiva) and 12Jyotirlinga(phallic shrines) to explore. Besides that the cremation on the bank of holy Bagmati river is another attraction for tourists.
Boudhanath:- The 36-meter-high stupa of Boudhanath is one of the largest stupas in South Asia. With countless monasteries surrounding it, Boudhanath is the center of Tibetan Buddhism in Nepal. Built in the shape of amandaladesigned to replicate the Gyangtse of Tibet, the stupa was renovated by Licchhavi rulers in the 8th century. The location of the stupa is interesting as it once lay on the ancient trade route to Tibet and it was here that Tibetan merchants rested and offered prayers for centuries.
Book your amazing tour to explore the city with locals.

A bottle of mineral water.

Hotel pickup and drop-off (inside Kathmandu valley only)

Which is not included in inclusion section.

Unexpected situations like political environment, weather condition, natural disasters which are out of our control can affect your trip. This may change or alter your itineraries. In such cases, your guides or leaders will try to arrange the best alternative itineraries. They will try their best to minimize the effect but not be responsible for any delay, changes or inconvenient caused by it .