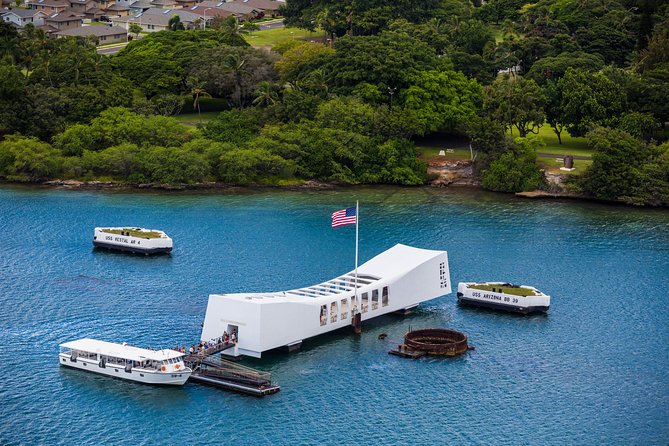 This inter-island day trip from Kauai to Oahu makes it easy to visit Pearl Harbor, withround-trip airfare, ground transport, and admission to the memorials all included. Get skip-the-line admission to the USS Arizona Memorial, see the USS Bowfin submarine, and visit the USS Missouri battleship or the Pacific Aviation Museum. Recorded commentary via audio guideslet you explore each site independently.

Fly out of the inter-island terminal on Kaui and be greeted by a representative on arrival in Honolulu. After a brief orientation you are provided with vouchers and tickets to the attractions at Pearl Harbor.

Once you're transferred by boat to the USS Arizona Memorial, there's no need to wait in line. Simply use your priority admission for fast-track entry and explore this top Hawaii destination at your own pace.

Stop by the Pearl Harbor Visitor Center to watch a 25-minute video depictingactual film footage of the Japanese attack on Pearl Harbor. You'll be taken to the USS Bowfin for a self-guided audio tour of the submarine, and receive a pass and audio set to its museum.

Use another pass to transfer to Ford Island for a look at the USS Missouribattleship, or opt to spend your time with an audio tour at the Pacific Aviation Museum instead.

Departing Pearl Harbor, conclude with a brief Honolulu city tour before heading back to the airport, if time permits. Your driver points out historical landmarks such as the King Kamehameha Statue, Iolani Palace, State Capital, Washington Place, and the First Church. From the inter-island terminal, you'll board your plane for the return flight to Kauai.

Round-trip airfare from Kauai to Honolulu

Boat ride to and from the USS Arizona Memorial

This tour package does not include hotel pick up & drop off on the neighbor islands.

We are not responsible for and do not extend financial reimbursement for delays caused by factors such as traffic, weather, mechanical issues, or problems concerning Navy-operated shuttle boats. The US Navy has the right to shut down the boat for public safety. This is beyond our control and we cannot be held responsible for their actions.