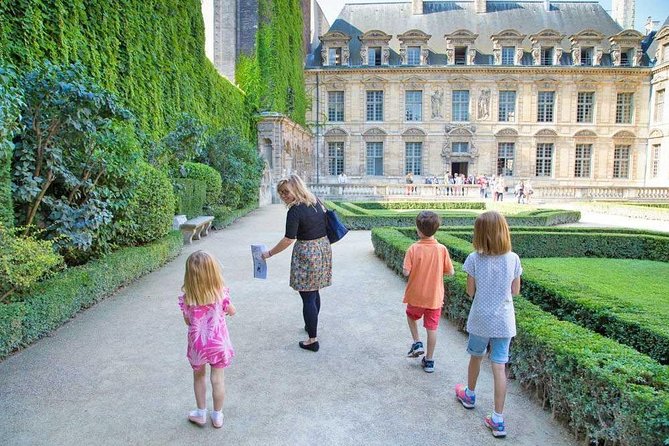 Discover the most charming and vital neighborhood of Paris during this2-hour private tour for the whole family.Take your kids to an exploration of the Marais district, enjoy its marvelousbuildings and its narrow medieval lanes alive with the hidden gardens,secret courtyards, hip art galleries, design shops, trendy boutiquesand fashionable gourmet restaurants.
Highlights include Htel de Ville, Place des vosges, the JewishQuarter, St-Paul-St-Louis Church.

With our kid-friendly guides everyone in your party will be engaged in the history and landmarks of Le marais.Le marais is an historic district in the heart of Paris and it offersat once the breathtaking fascination of history and the modernity of the metropole.

You will get to learn about the many layers of its intricate past:Le marais used to be a swamp (which is the very meaning of the word
Marais in French) and then went through many ups and down, from beingan aristocratic residential area to being completely abandoned by thenobility after the French Revolution and then becoming a working-class,bohemian and even shady neighborhood.

After its rehabilitation, theMarais is today one of the most hip and energetic areas of the City of Light.You will meet your guide at the City hall, on Place de lHtel deVille, stroll up the rue des Rosiers for an exploration of the JewishQuarter, which once hosted the largGare de l|est community in Europe and is now filled with delis and delicious eateries. During the tour your guide will show you a series of secret courtyards, le Centre pompidou, the National Archives Garden and St-Paul-St-Louis Church. Last but not least, you will then marvel at the view of Place des vosges, deemed tobe the most elegant square in the world, and you can even visit thehome of Victor Hugo who used to live at number 6 while writing LesMiserables and enjoy a nice view from its windows.