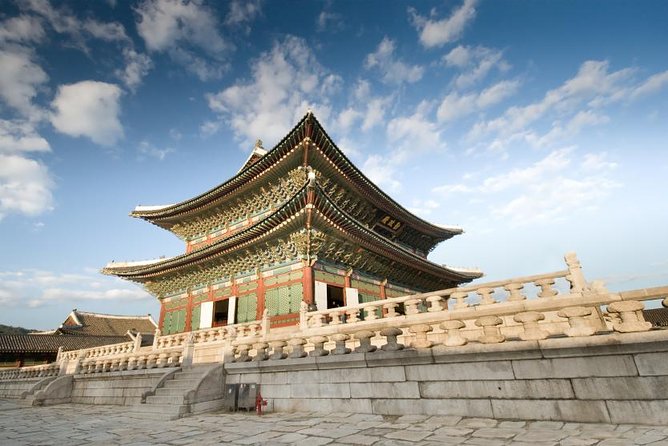 This immersive experience in Seoul will give you an in-depth look at traditional Korean culture. With your knowledgeable guide, wander through grand palaces, learn about the history of Korea from ancient times to today and witness age-old customs come to life at a folk village. A Korean lunch and comfortable coach transport is included.

Begin your morning with pickup from your Seoul hotel and then drive by air-conditioned coach past Blue House, the executive office and official residence of the South Korean head of state and the President of the Republic of Korea. Your guide will remark on the traditional Korean architectural style of this stately residence.

Your first stop is Gyeongbokgung palace, a royal palace constructed in 1395. Because much of it was destroyed during the Japanese occupation, there has been a large effort to restore it to its original condition. With your guide, marvel at the grandeur of the preserved portions and the restorations.

Here, visit the National Folklore Museum, which uses replicas to illustrate the history of traditional life of Korean people. Browse the numerous exhibitions more than 90,000 artifacts conveying what life has been like for Koreans from ancient times to the 20th century. Youll also learn about the deep roots of Confucianism in Korean culture.

(Please note that Gyeongbokgung palace is closed on Tuesdays, in which case youll visit Deoksugung palace instead. This walled compound with traditional palace buildings, forested gardens and a Statue of king sejong the Great is home to the Seoul museum of history, where you'll discover Seoul's traditional culture as you navigate the exhibits with your guide.)

Next, tour Jogyesa Buddhist Temple, the chief temple of the Jogye Order of Korean Buddhism. Outside, admire the lovely locust and baeksong trees lining the entrance. Enter the Daeungjeon, the main temple building dating back 500 years, and see the statue of Seokgamoni, the historic Buddha at the moment of enlightenment.

Then, you'll get a chance to take a look at the Korean Ginseng Center beforeenjoying a tasty Korean lunch at a local restaurant. Youll then spend your afternoon exploring the Korean Folk Village, a living museum that displays elements of traditional Korean life and folk culture. You'll get the unique opportunity to watch well-preserved customs such as pottery making, basket weaving and the hand-making of winnows, musical instruments, embroidery and bamboo, wood and brass wares.

After this incredible immersive experience, youll be taken back to your Seoul hotel.