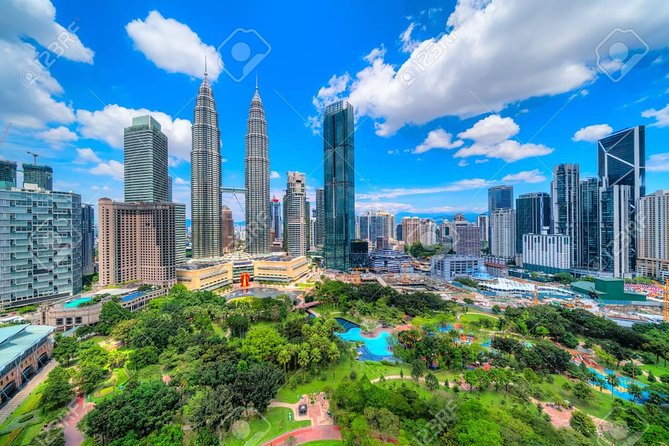 An exciting 4 hour tour for you to explore Kuala lumpur on this perfect itinerary. Go up the Twin Towers and enjoy magnificent views of city, walk on the sky bridge and observation deck and admire interesting structures across the city. Our tour also includes a tour around the city stopping for photo opportunities at the National monument, the National mosque, the old courthouse and the Kuala lumpur railway station. Finish off your tour enjoying the views from the Kuala Lumpur Tower observation deck.
This is a great way to get a quick view of Malaysia's capital city.

This four-hour tour provides a brief introduction to Kuala Lumpur's famous locations, and allows time to explore the city at leisure. You will meet your local driver/guide upon pick-up from your city hotel in the morning and embark on your guided, narrated tour in our comfortable air-conditioned vehicle.

Visit the various Kuala Lumpur attractions, making photo stops at any location you prefer. All you need to say Pull Over and the driver/guide will be more than happy to accommodate. The tour will take you to the King's Palace, a symbol of Malaysian sovereignty, as well as Merdeka square, which features the worlds tallest free standing flag pole nestled between the old courthouse and the famous Selangor Club built Victorian style architecture.

Look up at the perfectly symmetrical twin structure of the 88-story Petronas twin towers, the multifaceted steel walls and twin spires built as an integral part of the structure are strengthened by the sky bridge. The building was designed by the world renowned Argentinian American Cesar Pelli. Enjoy breath taking views of the city from the twin towers bridge and then from the observation deck.

Then, proceed along the beautiful Lake Gardens on your way to view the National monument, commemorating Malaysia's struggle sacrifice made during World War II and the Malaysian Parliament House. Dont forget to stop and admire the modern construction of the National mosque and the pleasant Moorish architecture of the Kuala Lumpur Railway Station.

You will also visit the six-tiered Chinese landmark of Thean hou temple built to match some of the temples in Mainland China, a grand structure that never fails to impress tourists with its architecture. The final stop and drop off point of your sightseeing tour of Kuala Lumpur is the KL towers and you will be pleased to know that your entrance ticket for the observation deck is included in this tour.

All taxes, fees and handling charges.

Guaranteed to skip the long lines at Petronas Twin Towers.

A minimum of 2 people per booking is required.

Subject to favorable weather conditions. If canceled due to poor weather or any unforeseen circumstances , you will be given the option of an alternative date or full refund.

In case if you do not wish to take tour at 9 am, please contact your local supplier 72 hours before tour if they can arrange the tour afternoon or evening time.