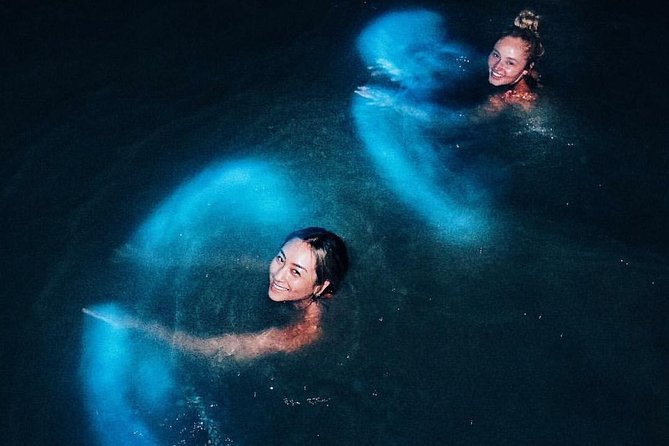 Experience one of Puerto Ricos most magical bioluminescent bays and head to discover the South-west part of our Island. The bio bay at La Parguera is the islands only bioluminescent bay where you are still allowed to swim. Head on a 2 hour estimate journey thru the picturesque central mountains until reaching the southern coast.  Once arrived at La Parguera enjoy some appetizers at a local restaurant (additional food and beverage costs not included) before heading out in the boat ride through mangrove canals.  You will enjoy the West side's famous sunset as night falls, and we head out to the bay. Then its time to delve into La Parguera's glowing waters for approximately 30-45 minutes before returning to shore.  Here you will have the opportunity to jump into the water and enjoy this spectacle, or watch others swim as they create gleaming streams of light.

Likely to Sell Out

La Parguera, a small fishing village in Lajas (southwestern area of Puerto Rico) has reborn as a local and international destination.  Because of its geographical location, La Parguera offers one of the best preserved coral reef systems and mangrove forests in the Caribbean. Various restaurants and bars add to the local attractions.

Begin with pickup from your San Juan hotel, we will then drive for about 2-hours (bathroom stops offered along the way). Enjoy the panoramic and lush green views of the Central area of the Island, and passing by the renown PONCE letters, we will continue our drive to the Southwestern side.  We will stop for some appetizers before heading out in the boat ride.

The magic begins with the beautiful sunset view while we head out for a 25 minute ride through the mangrove channels.  Here you will have the opportunity to swim before it gets dark and we head out to the area where the bioluminescence happens.  Your guide will explain everything you need to know about these microscopic dinoflagelates that give off heat in the form of light when disturbed.  Once we reach the bay you will have the opportunity to swim (optional) and experience this phenomenon first hand. We will spend some time here so everyone may take in the magic, before we head back to shore.  Activity concludes with the drive back and drop off in San Juan.

Please note:
- In order to preserve the life of the dinoflagellates if you plan to swim on the bay abstain from using perfume, her gel/spray and mosquito repellent (use only organic ones).
- You must be able to climb back to the boat thru a small ladder.

Bottles of water and local beer at the boat

Minimum numbers apply. Cancellation after confirmation is possible if there are not enough guests to meet requirements. If this occurs you can choose between an alternative tour date or full refund.

It is an approximately 2-hour drive from San Juan to La Parguera each way, depending on the time of day and traffic.

If planning to swim: follow preservation instructions, wear bathing suit, bring a towel and a change of clothes.  Rash guard is also recommended as we may encounter jellyfish.

Total activity duration of 8 hours include driving time and stop for appetizers.