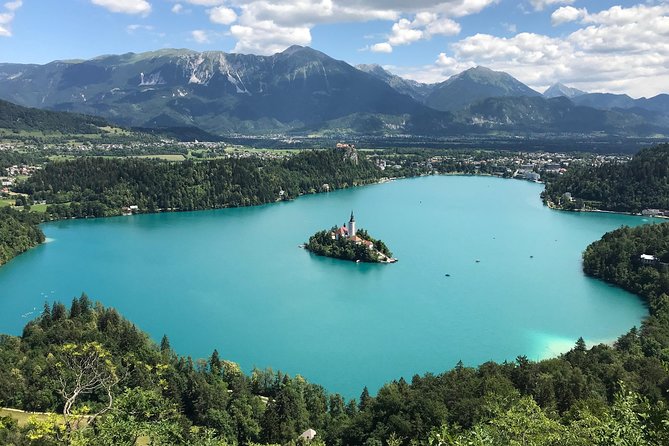 Visit the charming Ljubljana, the capital city of Slovenia, and Bled, a popular tourist destination, which is considered one of the most beautiful alpine resorts also known as the Alpine pearl.

Ljubljana, the capital and largest city in Slovenia, is the cultural, educational, economic, political and administrative centre of the country. It is renowned for its rich history, which is reflected in the unique architectural heritage. Its old town centre is embraced by Ljubljana Castle and the river Ljubljanica where the feeling of the city is the strongest. On your trip, you will encounter ancient and modern architecture. You will visit the old town center where you will admire the works of the Slovene architect Joe Plenik, who took an important part in designing the Ljubljanas most famous bridges, town squares and parks. In a little more than three decades, Joe Plenik transformed Ljubljana from a provincial city to the capital of the Slovene nation and reshaped the urban part of the city. His influence can be felt everywhere, but mostly along the river Ljubljanica.

On your trip, you will visit some of the most interesting buildings and monuments, such as the Ljubljana Town Hall, the Triple Bridge, the Shoemakers Bridge, Ljubljana Cathedral, the Robba Fountain, Preeren Square, Congress Square and other attractions. The symbol of the city is the Ljubljana Dragon. It is depicted on the top of the tower of Ljubljana Castle and on the Ljubljanica - crossing Dragon Bridge. It symbolizes power, courage and greatness.

Bled is an Alpine town which represents one of the oldest and most beautiful tourist destinations in Slovenia. Its main attraction is the lake which surrounds Bled Island. The island has several buildings, the main one being the Gothic church dedicated to the Assumption of Mary. The church has a make-a-wish bell and is frequently visited by newlyweds and other guests. Lake Bled will certainly leave you speechless since it offers various sport activities and represents a place where you can spend the most romantic moments of your life. On the trip, you will walk around the lake enjoying the fresh alpine air and watching swans and ducks at play. Also, you will admire Bled Castle built on a precipice above the glacial lake which according to written sources is the oldest Slovene castle. At the end, you will pass by some other local monuments and refresh ourselves with a delicious vanilla and custard cream cake called cremeschnitte (kremnita). You will also have a chance to take some beautiful photos of the lake, island, castle and the nearby Alps.

Hotel Guests must advise supplier as soon as possible: hotel details or any other preferred pickup location