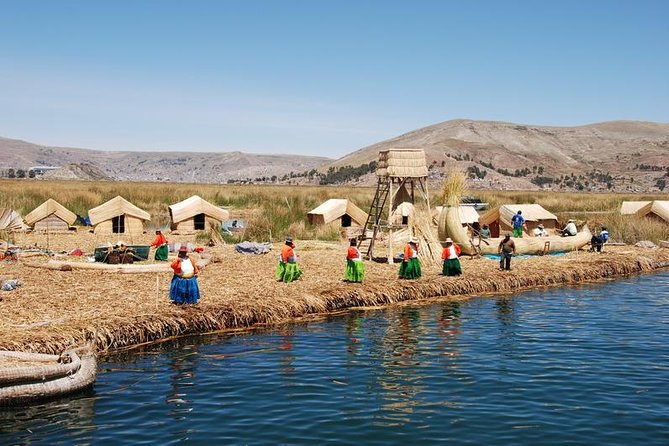 Visit Taquile Island where you will see an indigenous community that has conserved its original traditions and organization. And in addition make a stop at the famous Uros reed islands.

This tour begins between 6:00-7:00 am with a transfer from your Puno City Center hotel to the port. Then by motor boat (35 feet long with a covered section in case of rain or cold weather, 25 individual seats) we visit the Uros floating Islands. Stepping on them feels very much like a water bed (but it is quite safe). We see the houses, the islands and meet its friendly inhabitants. Uros people are descendants of one of the oldest South American groups. Rides on traditional reed boats can be arranged. In the mornings these islands can be crowded. We visit two of the 60 islands before continuing on to Taquile Island.

After a relaxed navigation of an extra 2 1/2 hours, getting the chance to enjoy the spectacular views offered by Lake Titicaca, we get to Taquile island. There, lives a unique community. A long path gradually ascending (45 min. hike approx.) will take us to the village, the views are beautiful. Visit the communal cooperative where you will find handicraft textiles of high quality. The views are magnificent. At 2:30 pm approx. we will depart back to Puno City (3 hours return journey). At 5.30 pm we arrive to Puno. On arrival to Puno we will transfer you to your Puno hotel.

Optional reed boat ride, can be arranged directly at the Uros Islands and paid directly to the local boat skipper