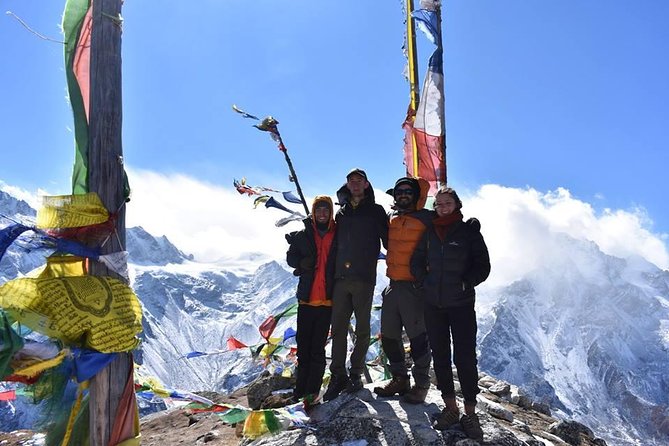 Tserko- Ri, standing at an altitude of 5033 m/16,500 ft, is the crown of the Langtang valley. Hiking to Tserko- Ri, is a great trip that takes you to 5000m, which offers a 360 degree view of the Langtang valley.
Highlights
The picturesque Langtang valley
Tibetan/Tamang communities and their rich Buddhist culture and tradition.
Trek through rhododendron and pine forests into Langtang Valley
See wild species such as Red panda, snow wolves and Himalayan Thar
Opportunity to climb popular and royalty-free Tshergo-Ri peak (5033m)
360 View of mountains from Tserko Ri (5,033m),

The Langtang Valley has long been a favourite trek due to its stunning views, exciting Tamang culture. Despite badly effect due to devastating earthquake of 2015 and subsequent landslides, the region has reopened for trekking again. As most of the trekking in Langtang entirely takes place below 4000m, the trekking trail is suitable for trekkers of all ages and under any physical condition.

Tserko- Ri hiking is an absolute adventure day trip, taking anywhere from two to four hours to ascend depending on your fitness, the effect of elevation on you and the trail conditions. To avoid the strong winds, you have to start the journey very early in the morning. There are two trails that start up the initial ridge, the one a bit further north in the valley seemed a bit easier, but they both merge quite quickly.

The top of Tsergo Ri is a very pleasant spot with plenty of space, plenty of prayer flags and polls add to the atmosphere and you can make out Kyanjin Gompa and other nearby features far below you. Most stunning of course is the excellent mountain panorama that unfolds before you, allowing you a really stunning view. You get a perfect view of Langtang to the west, Yala peak to the north and Dorje Lakpa and Shisha Pangma to the east. You can see very clearly the Ganja La pass through the southern mountains as well.

Kyangjing Gompa affords breathtaking views of Langtang Ri and Yala peak and with a possibility of a day hike from here to explore Langshisa Kharka (4285m) and Langtang Glacier (4800m). You also have the opportunity to climb Tshergo Ri without the need to pay royalty. The trail passes through Langtang national park, which is home to such endangered species as Red Panda, Snow Leopard and Himalayan Black Bear. The forest combines a mix of pine, oaks and rhododendron species.

International airport pick up and drop off

All meals ( B/Fast, Lunch and Dinner )while on the trek

Tea house accommodation during the trek

Medical evacuation in case of emergency

Sleeping bag and Down jacket

Meals where not specified in the itinerary