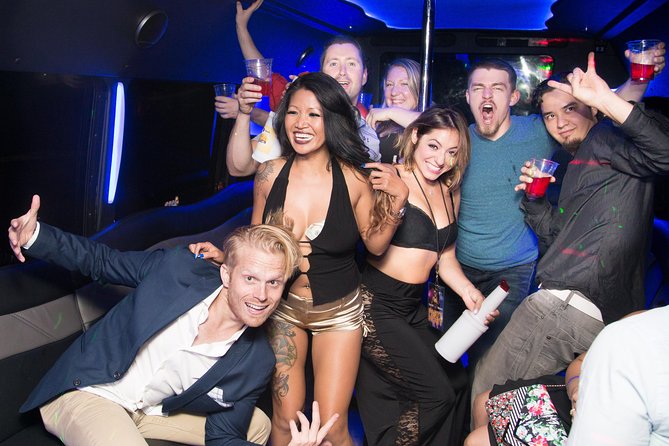 Join Las vegas' #1 Club Crawl Experience for a day or evening at some of Vegas' hottest clubs without waiting in long lines or paying cover charges. Follow your party hostess to the dance floors from 1 ultra-bar to 3 popular nightclubs as you party in style cruising down the Las vegas Strip between stops on a luxurious limo party bus, where you can pop your own bottle, strike a pose for the professional photographer on board, and receive free souvenir giveaways at the end of the night!
Party bus transportation provided by Elite Transportation License #CPCN2086

Hit up Vegas' premier Pool parties & Nightclubs without waiting in long lines or paying expensive cover charges with the highest customer rated club crawl in Las vegas! Kick off your Vegas weekend with a warm greeting from a familiar face, your professional party host! Having seen her photo in advance by email, consider her your first local friend in Vegas. Grab your bottle and pour yourself a drink as you cruise down The strip between stops on a poppin' luxury party bus, where the drinks flow, the music is on point, cameras are flashing & your hostess is the life of the party! Do your best to keep up as you follow her to the dance floors of 3 popular Vegas hotspots in style.

Your talented hostess is your one-in-all party starter, tour guide, and adult babysitter- on a mission to get you TURNT UP! She'll escort the entire group into each venue ensuring expedited entry and waived cover charges. During the party busrides, your hostess brings life into the group doubling as your barback to care for your cocktail needs with 4 mixer options, cups, ice and plenty of water bottles to stay hydrated throughout the day/night. Pace yourselves though! You DON'T want to miss out on the last ride- that's where all the magic happens! Survivors of the turnt up experience leave with fun giveaways & surprises to wrap up the tour. Strike yourbest pose for the professionalphotographer on board for fun party photos to look back on (that's if you can remember) after your crazy vegas weekend. Wherever the tour takes you, your fun-loving host is sure to show you a great time!

Clubs vary daily, but may include:

Alcoholic beverages on party bus and inside clubs

You must wear appropriate cocktail attire to be admitted to nightclubs. Dress codes are strictly enforced. Men should wear slacks, dress shoes, and button down shirts; jackets and ties are optional. Women should wear dresses or skirts/slacks and blouses and high-heeled shoes. Jeans, sneakers, flip-flops, t-shirts, hats, beachwear, and sweats are not allowed.