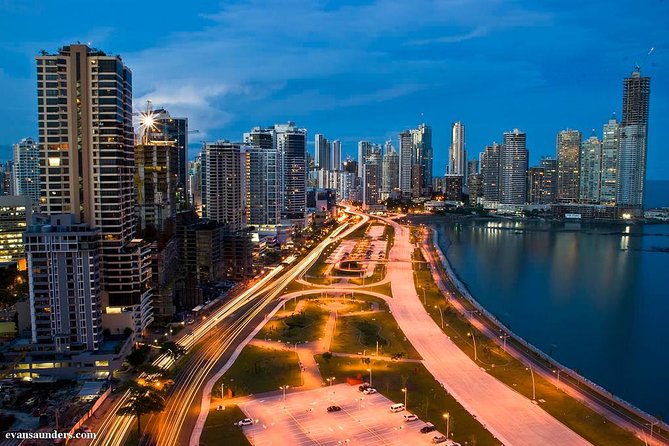 Panama city Tour + Canal Museum + Canal Visitors Center + Locks At Miraflores
Enjoy a guided sightseeing tour and visit the most important sites and landmarks of Panama. Tour both the historical and modern areas of Panama city and visit the world-famous Panama Canal, whose impressive system of locks continues to fascinate visitors.
Tour Duration:
One half day orapproximately 5 hours. The schedule is adaptable to less time depending upon your needs.

Your tour begins when you are picked up at the Tocumen International Airport (PTY) or at one of the hotels in Panama city. In route from the airport well pass through an urban section of the noteworthy for the modernness of the designs, the immensity of the skyscrapers and the sophisticated shopping areas and condominiums. An interesting side note is that Panama City was the first city founded by the invading Spaniards on the shores of the Pacific Ocean on the 15th of August, 1519.

Today Panama City is the most modern city in Latin America. Well explore such areas as the city center with its enormous skyscrapers and the waterfront strip with its spectacular boardwalk. which spreads out over an area of same 66 hectares (163 acres) a large portion of this having been taken from the sea. Within this zone youll find public squares, parks, bicycle paths, skate parks and even a new soccer stadium.

Well also visit the Old Town (Casco Viejo or Casco Antiguo) section of the city where youll have the chance to walk around and explore this colonial area, take photographs and admire what is truly an open-air architectural museum complete with churches, cobblestone streets, theaters, homes and buildings all constructed in the Colonial era around 1673. In 1997 this area was declared Patrimony of Humanity (Heritage of Humanity ) by UNESCO.

From there well continue on the Amador Causeway, know locally as just The Causeway, which is another oceanfront boardwalk area ; Naos, Perico and Flamenco. You will, as well, get an excellent view of the Pacific entrance to the Panama Canal and the majestic Las Americas Bridge. Later you will have the opportunity to see the Canal operation up close as well take you to the Canal Visitor Center at Miraflores Locks. There youll be able to watch how the locks function and witness the passage of all sizes of ships through them. From the terraces overlooking the Canal youll watch as the ships are raised above sea level or lowered back down to it depending upon their direction of travel. Youll also have the chance to visit the Canal museum where youll learn all about the function of the Canal, its history and be able to interact with simulators that will give you the experience of piloting one of the huge ships through the Canal from the captains bridge. Also available for your education and entertainment youll find galleries and exhibition halls, some of which offer virtual reality presentations in 3D.

This fascinating Panama City Tour will additionally take you to many other sights brimming with history, culture and scenic beauty. After this tour we will take you back to the airport or your hotel.

Lunch and dinner is available at the Atlantic & Pacific Company restaurant located at the Miraflores Locks Visitors Center during the hours of operation noted above. If you wish to eat at a different restaurant in the city, your guide will assist you. Meals are the responsibility of each guest.

We also can offer to transport you to the museum of the famous architect Frank Gehry, The Biodiversity Museum. At the Biodiversity Museum youll have the opportunity to learn about the birth of Panama and about how our beautiful country changed the world. Entrance fees to these museums are at the responsability of each guest. Our guide is available to pick you up at these museums when you complete your visit.