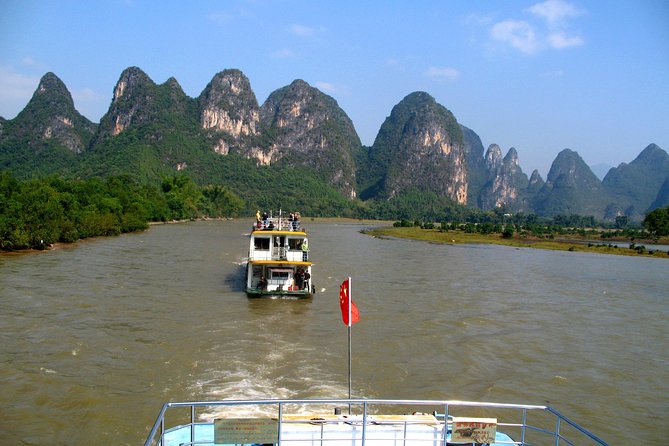 This small-group tour leads you to experience the classic and unforgettable cruise along Li River for 4hours. It is one of the must-do highlights in Guilin. Embark on adeluxe cruise with your English-speaking local expert guide. This is the perfect chance to enjoy the picturesque view along Li River from Guilin to Yangshuo. A coach transfer back to Guilin can be arranged if you do not stay in yangshuo

You will be met at your hotel lobby between 8:00am to 8:30am. Join in a group tour to the pier. Embark on a deluxe cruise and enjoy the picturesque scenery along Li River for about 4 hours.

Chinese lunch will be served on board around noon. Just enjoy the delicious food while being amazed by the beautiful natural scene. The cruise will pass by Xingping Old Town at 1:00pm and reach Yangshuo Pier at 1:30pm. Yangshuo is a historical Chinese town of over 1,000 years with Western influences.

Upon arrival, you will have some free time to explore Yangshuo on your own. Your local guide will let you know the pickup time and location. You could choose to stroll along the West Street.

When the tour is concluded, if you choose to stay in Yangshuo, your guide can provide direction to your hotel in Yangshuo. If you are going back to Guilin, you will be picked up at the designated location and transferred back to Guilin. Estimated time of arrival at 6:30 pm.

Chinese lunch on board